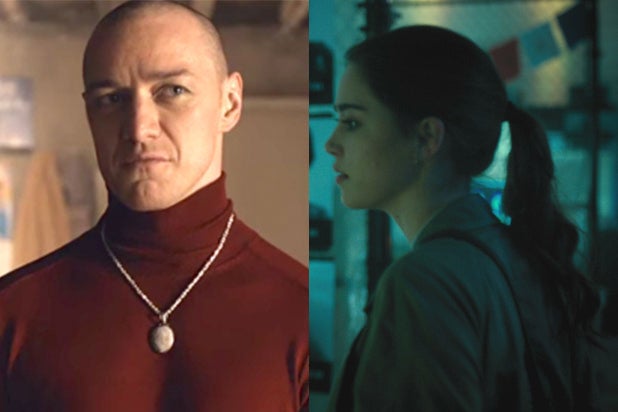 M. Night Shyamalan’s multiple-personalities thriller “Split” has a one-track mind at the box office, topping the charts for a third consecutive weekend with $14.6 million at 3,373 locations.

The Universal/Blumhouse film stars James McAvoy as a man with 23 different personalities who kidnaps three teenage girls. It scared up an estimated $40 million during its opening weekend, doubling estimates and quadrupling its estimated $10 million budget. “Split,” which analysts projected would make about $14 million this weekend, has grossed $98.7 million since its Jan. 20 release. It also became the first Universal film since 2015’s “Straight Outta Compton” to hold the top spot for three consecutive weekends, and Shyamalan’s second film to do so since 1999’s “The Sixth Sense.”

“Split” edged out Paramount’s “Rings” for the top spot during Super Bowl Weekend, as the long-awaited sequel to “The Ring” franchise zeroed in on $13 million at the box office at 2,931 locations. The studio had estimated an opening weekend in the $10 million to $12 million range, while analysts projected a less conservative $14 million.

“Rings,” directed by Javier Gutierrez, follows a young woman who tries to save her boyfriend who watched a mysterious video tape that promises to kill the watcher seven days after they view it. The film stars Matilda Lutz, Alex Roe, Johnny Galecki, Aimee Teegarden, Bonnie Morgan and Vincent D’Onofrio, and was produced for an estimated $25 million.

Best Picture nominee “Hidden Figures” placed fourth, as the Space Race drama zoomed to $10.4 million this weekend at 3,401 locations. Taraji P. Henson, Janelle Monáe and Best Supporting Actress nominee Octavia Spencer star in the film from Fox and Chernin Entertainment as NASA mathematicians who were instrumental in sending some of the first astronauts to outer space. The film picked up a SAG award for Outstanding Performance by a Cast in a Motion Picture last weekend.

The weekend’s only other newcomer in wide release, STX’s “The Space Between Us,” opened to $3.8 million at 2,812 locations, good enough for eighth place. Analysts had projected an $11 million weekend, while the studio estimated a more conservative $8 million to $9 million.

The romantic sci-fi film follows a boy living on Mars who befriends an Earth-bound girl online and visits her when he turns 16 — only to realize his body can’t survive Earth’s atmosphere for long. Asa Butterfield, Britt Robertson and Gary Oldman star in the film, which was directed by Peter Chelsom. The story is based on a treatment by Stewart Schill with revisions by Richard Barton Lewis and Allan Loeb. Loeb wrote the screenplay.

The movie received an A- Cinema Score, and 69 percent of the opening weekend audience was female, with 33 percent under 18. “The Space Between Us” was produced for about $30 million.