Spotify CEO Daniel Ek addressed the swirling controversy over Joe Rogan as a growing number of musicians are pressuring the streaming audio company to cut ties with Rogan, who has been accused of spreading COVID-19 misinformation.

“We don’t change our policies based on one creator nor do we change it based on any media cycle or call from anyone else,” Ek said Wednesday during the company’s quarterly earnings call. “I do believe they’re right for our platform. And while Joe has a massive audience, is actually the number one podcast in more than 90 markets, he also has to abide by those policies.”

Elk’s comments come after Neil Young, Joni Mitchell and other artists began pulling their music and podcast catalogues from Spotify in protest of Rogan and others’ ”promoting lies and misinformation” about vaccinations. Young, in particular mentioned Joe Rogan’s podcast, “The Joe Rogan Experience.” 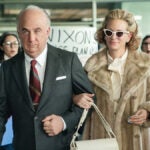 On Sunday, Spotify began labeling all podcasts that contain any information regarding the pandemic, but has not found Rogan to have broken any rules.

Spotify’s stock shot up in the days after the streamer announced the new labels, which were part of an updated policy on COVID-19 discussions within its podcasts. But after Spotify’s earnings included lower growth expectations for the current quarter, the company’s stock plummeted more than 20% in after-hours trading (ask Netflix how that feels), before rallying halfway back. It ended trading Wednesday at $191.92 a share, before dropping as low as $149.95; it has since gone back up to $170 as of 5:30 p.m. ET.

Spotify did not give a reason for why it lowered its guidance for the first quarter, which only further caused investors to panic. The company said it had 180 million paid subscribers and 406 million monthly active users as of the end of 2021, both of which fell right in line with expectations. But it only expected to reach 183 million subscribers by the end of the first quarter of 2022.

Rogan defended himself earlier this week for his decision to have vaccine skeptics on his show, but also apologized to anyone he “pissed off” and promised he would do more to balance out the opinions on his guests.

“If there’s anything that I’ve done that I could do better, it’s having more experts with differing opinions right after I have the controversial ones. I would most certainly be open to doing that. And I would like to talk to some people who have differing opinions on the podcasts in the future. I do all the scheduling myself and I don’t always get it right,” he said.

Rogan added he knows he “absolutely” gets things wrong and engages in conversations where he has “no idea what we’re talking about.” He promised to be more responsible about that in the future and said he agrees with his platform’s decision to add the disclaimer. He also said he is a fan of Young and Mitchell.