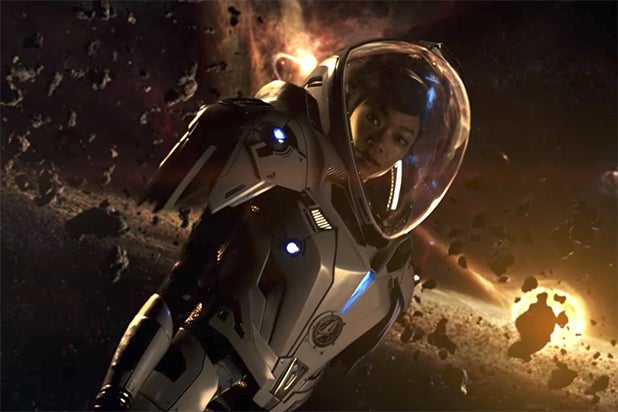 The 50th anniversary of “Star Trek” was a pretty exciting one for Trekkies. We got “Star Trek: Beyond,” a movie that gave longtime fans a fun, excellently crafted interpretation of what an episode of the original series would look like as a modern blockbuster rather than trigger bitter internet rants and fights over how J.J. Abrams is killing the franchise. We also got “The Fifty Year Mission,” an exciting pair of books filled with first-hand accounts of how every “Trek” TV show and movie was made.

But the biggest announcement was the launch of “Star Trek: Discovery,” a brand new CBS series with an all new cast with an all new ship. Unfortunately, the first trailer, which finally dropped on Wednesday, gives us barely anything new or interesting to dig into, and what little is given is extremely underwhelming.

Nearly all the dialogue shown in the trailer comes off as incredibly stiff and unnatural, particularly Michelle Yeoh, who sounds like what a person who has never seen a full episode of a “Trek” series thinks a Starfleet captain sounds like. The new alien science officer, Saru, spouts a dramatic line about sensing death coming, but it just sounds like a line Troi would say delivered with the formal, emotionless voice of Data. But look! We’re fighting with Klingons again! Look at how extravagantly designed they are!

Speaking of design, for all of the insistence that “Discovery” would adhere to the original timeline rather than the Kelvin timeline established by Abrams’ movies, the trailer gives off the aesthetic of a show trying very hard to copy Abrams’ style on a TV budget. Camera tilts and lens flares can be found everywhere, and like Abrams’ movies, we see Starfleet ships flying into a planet’s atmosphere. Yes, the Abrams’ aesthetic is the one non-Trekkies have become familiar with thanks to the films, but the shots of space feel uninspired, while the Klingons and their sets look busy and overdone.

Still, even if the poor editing of the trailer isn’t hiding something of better quality and “Star Trek: Discovery” ends up being as visually dull and dramatically rigid as this trailer suggests, it’s important to remember that one of the constant patterns in “Star Trek” history has been a round of growing pains. The first season of “The Next Generation” took a lot of critical lashings, but once that show hit its stride, we got some of the greatest sci-fi stories ever told with episodes like “The Best of Both Worlds” and “The Inner Light.” Trekkies often joke that “Deep Space Nine” didn’t become a cult classic until Captain Sisko grew a beard a few seasons in.

The same could be true of “Discovery.” A bad start doesn’t mean we have another “Star Trek: Enterprise” on our hands.  Trying to find a way out of the shadow of that iconic original Enterprise crew can take some time, but there’s no reason to believe it can’t happen again. The one encouraging element of the trailer were shots of what appears to be several new alien species, which can hopefully mean more fleshed-out alien species for humanity to bounce its philosophy off of. Also, Yeoh, despite being heavily featured in the trailer, is currently only credited for the first episode of the series; so it is possible that the footage in the trailer may only come from the start of the series.

Here’s hoping that this is the case, and that “Star Trek: Discovery” can find new ground to cover rather than just put a new crew through the same intergalactic tussles we’ve already seen before.

'Star Trek' 101: The Weirdest Episodes, From Tribbles to The Rock (Videos)

Tribbles, holodeck fantasies and Abe Lincoln are a part of the goofy side of the “Star Trek” universe

"Star Trek" has become known as a series filled with serious examinations on ethics and philosophy. But with over 700 episodes over five series, there are bound to be some that... to put it charitably... are completely insane. Here are the weirdest "Star Trek" episodes ever, ranging from fun classics to writer-room monstrosities.
View In Gallery