A chance to see “Star Wars: The Force Awakens” is the dying wish of a Spring, Texas man with terminal cancer, and his family has reached out to Disney Studios to screen the film early for him.

They received a glimmer of hope on Tuesday with a Disney spokesman indicating that the studio has been in touch with Daniel Fleetwood’s family, but declined to provide further comment.

The 32-year-old has been a “Star Wars” devotee since he was eight or nine years old and was very much looking forward to seeing the next chapter in the iconic sci-fi series.

He’s outlived the original July prognosis of the doctors treating his spindle cell sarcoma, a rare connective tissue cancer, which gave him two months to live. But on Monday doctors told him that his condition has worsened, according to his wife Ashley Fleetwood, and he now doesn’t know if he’ll make it until the “The Force Awakens” opens on Dec. 18.

“His dad got him into ‘Star Wars’ when he was eight or nine years old. He instantly fell in love with ‘Star Wars’ and it just grew from there,” Ashley, 29, told NBC News, adding that Fleetwood dressed up and camped out for all the previous “Star Wars” movies.

Fleetwood’s wish to see “The Force Awakens” led to a post on his wife’s Facebook page and grew into a Twitter campaign that has gone viral.

Among those urging the studio to grant his wish are “Star Wars” actors Mark Hamill, John Boyega, and Carrie Fisher, who all retweeted it with the hashtag “#ForceForDaniel.” And the film’s female lead Daisy Ridley added her backing on Instagram later Tuesday. 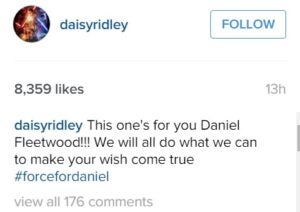 His wife said the support his request has received has been uplifting for him.

“Even if we don’t get to see the movie, for me, personally, just everyone caring so much, it matters so much,” she said

“The Force Awakens” director J.J. Abrams came through in a similar situation two years ago, when he helped a fan dying of cancer see “Star Trek Into Darkness” prior to its release. The man died two days after seeing the film.

Here’s video of the local news report on Fleetwood: