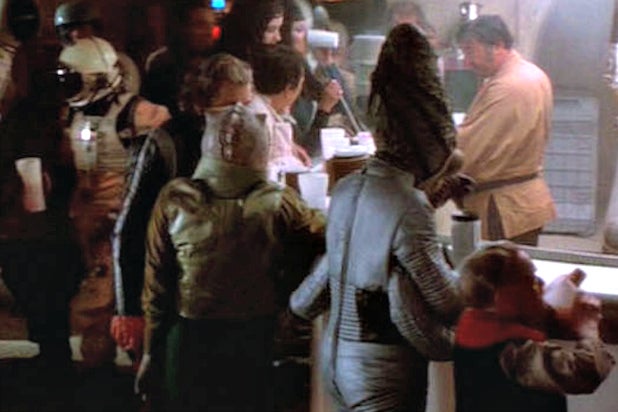 Hope you’re sitting down (on a bar stool), nerds — a “Star Wars” pop-up cantina is headed to Hollywood.

“The Scum and Villainy Cantina is nestled less than 12 parsecs away, in the wretched hive of Hollywood, CA,” the official announcement read. “This temporary pop-up experience transports you into a fully immersive environment where you drink, eat, and hang out as if you were in a galaxy far away.”

“If you’ve got the credits, we’ll serve your kind here … just make sure to leave your droids at home,” it continued. “Costumes encouraged.”

Taking reservations soon, the Mos Eisley Cantina mockup will have two-hour seating blocks, from 6 to 8 p.m. and 8:30 to 10:30 p.m. It will also serve you by appointment on Saturdays from 3 to 5 p.m. Walk-ins can hang between 11 p.m. and 2 a.m. on a first-come, first-served basis.

“Included with your reservation is two drinks of your choice, a souvenir pint glass, Scum and Villainy challenge coin, a few extra surprises, and two hours of the most immersive galactic scenery this far into the outer-rim,” the company wrote.

The Nerdist first reported the news of the coming cantina.