“Star Wars: The Force Awakens” unwrapped a nifty new Christmas Day record with its $49.3 million Friday to lead the crowded holiday party at the box office.

Disney and Lucasfilm’s J.J. Abrams-directed juggernaut is headed for a three-day haul in the $170 million range, which would easily be the best second weekend ever at the domestic box office.

“The Force Awakens” crushed the old Christmas Day record of $24.6 million set by Robert Downey Jr.‘s “Sherlock Holmes” in 2009, and will do the same to the $106 million second-weekend mark set by “Jurassic World” in June.

The movie’s domestic total is now up to $440 million after eight days and, after adding $27.5 million from abroad Friday, the international total is $449 million, giving “The Force Awakens” an $889 million global total.

That means it should exceed $1 billion worldwide in its eighth day at the global box office this weekend, easily topping the former speed record of 13 days set by “Jurassic World.”

The smashing first day of the Mark Wahlberg-Will Ferrell comedy “Daddy’s Home” ($15.7 million) and the better-than-expected debut of David O. Russell‘s “Joy” ($6.8 million) were nice presents for Paramount and Fox, and roughly translate to three-day totals of $46 million and $21 million, respectively, for the runner-up and third-place films.

The PG-rated “Daddy’s Home” isn’t popular with critics and received a “B+” CinemaScore, but no one at Paramount or Red Granite minded, since it will double projections for the weekend and is on pace to nearly match its $50 million production budget in its first three days.

“Joy,” which stars director Russell’s go-team acting team of Jennifer Lawrence, Bradley Cooper and Robert De Niro, drew a “B+” too. Critics haven’t found it as appealing as Russell’s recent films, but the fact-based tale of the millionaire inventor of a miracle mop (Lawrence) is connecting with the mature female audience it targets. 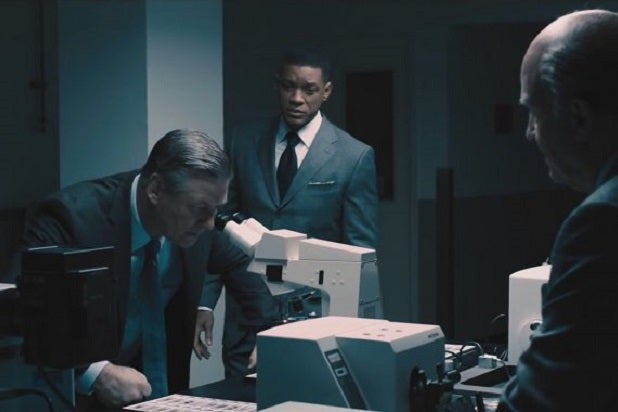 The opening of Sony’s football injury saga “Concussion” ($4.3 million, heading for $13 million) and the expansion of “The Big Short” were the box-office equivalent of a gift sweaters from Aunt Ida.

Paramount expanded the financial-crisis comedy-drama “The Big Short” and it took in $3.7 million, translating to $11.5 million and seventh place on just 1,585 screens.

The films’ CinemaScores — an “A” for the Will Smith football drama and an “A-” for the Adam McKay-directed Oscar hopeful — were like finding $10 bills in the pockets of those cardigans, though.

Even the weekend’s fifth wide opener, “Point Break,” came in at the high-end of low expectations, with $4 million first day that translates to a $10.5 million weekend and eighth place. That’s not what exactly what Warner Bros. and Alcon Entertainment wanted to see from a remake with a budget over $100 million, however. It drew a “B” CinemaScore.

Two films that opened against “Star Wars” last week showed some staying power. Universal’s Tina Fey-Amy Poehler comedy “Sisters” is looking at $15 million and fourth place in its second weekend after its $4.6 million Friday. Fox’s “Alvin and the Chipmunks: Road Chip” is on its way to sixth place and $13 million after taking in $3.6 million Friday.

Leonardo DiCaprio‘s “The Revenant” appeared to have a slight edge on Quentin Tarantino‘s “The Hateful Eight” on the first day in the battle of snowbound frontier movie thrillers at the box office, but both are off to very strong starts.

Comparisons are tricky because the rollouts are very different, but the Alejandro G. Iñárritu-directed “Revenant” debuted to $172,000 on four theaters for Fox. That translates $490,000 for the weekend, which would be a $122,000-plus per-theater average, and one of the year’s best.

“The Hateful Eight,” written and directed by Tarantino, brought in $1.9 million from 100 theaters that were equipped with 70mm projectors as part of a special 44-market roadshow presenting the film in that format rather than digital.

If “Hateful Eight” can keep that pace up it would come in with $5.3 million for the three days, and a strong $53,000-plus per-screen average for the Weinstein Company. It will open wide on New Year’s Day.