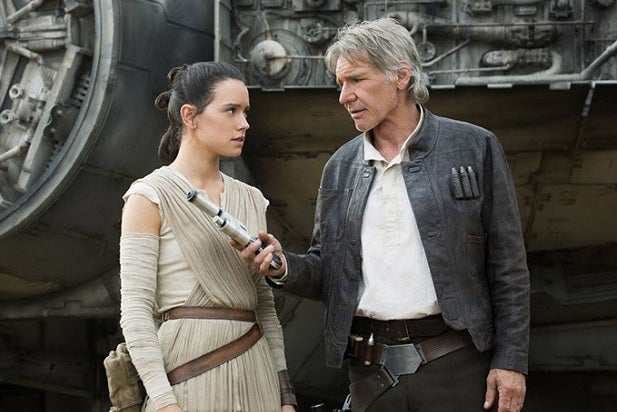 “Star Wars: The Force Awakens” became the top-grossing movie in U.S. box office history Wednesday, and it did so in record time.

North American moviegoers have shelled out more than $760 million, including $8 million on Tuesday, to see the seventh film in the beloved sci-fi franchise launched in 1977 by George Lucas since it opened on Dec. 18. Early shows and advance ticket sales pushed Disney’s J.J. Abrams-directed space epic past the record set by “Avatar” in 2009 on Wednesday.

“The truly impressive part of the box office performance of ‘Star Wars: The Force Awakens’ is the speed at which it is crossing these box office milestones,” Paul Dergarabedian, Rentrak senior media analyst, told TheWrap. It has taken “The Force Awakens” just 20 days, far less than the two months-plus it took James Cameron‘s 3D sci-fi blockbuster to get there.

The smashing box office performance of “The Force Awakens” validates a bold and risky acquisition strategy by Disney Chairman Chief Executive Robert Iger. In 2006, as the nation’s economy was about to sink into a recession that would last more than three years, Iger allied with Apple Inc. and acquired the Steve Jobs-led Pixar Animation Studios ($7.4 billion). In 2009, Disney acquired Marvel Studios for $4 billion and in 2012, added Lucasfilm for $4 billion.

That “Star Wars: The Force Awakens” would become the top-grossing movie ever in the U.S. has seemed almost inevitable even before it debuted. Advance tickets sales of more than $100 million and record trailers views — both of which blew away the previous marks by huge margins — and its massive social media profile were the first indicators.

Disney’s marketing team capitalized with an understated campaign that emphasized the stars from the original film and kept key plot points under wraps, even passing on seeking early critics awards to maintain the mystery, Newcomer Daisy Ridley‘s lead role as Rey was also a focus, as the studio sought to expand the audience beyond the franchise’s traditional male base.

The most clear signal that “The Force Awakens” would rewrite the box office record books came on Thursday, Dec. 17, the night before its official opening. “The Force Awakens” brought in $57 million in preview showings to top the former record of $43.5 million by 2011’s “Harry Potter and the Deathly Hallows: Part 2” by a whopping $13 million.

That set up a $120 million first day — no film had ever grossed more than a million in single day — that ignited an unprecedented record run that is still going. So far “The Force Awakens” has set new standards for domestic, foreign and worldwide openings, second and third weekends and fastest to hit $1 billion in global grosses, among many others. It was a major factor in 2015 setting the record as the biggest year at the box office ever at $11.a  billion.

Premium formats including 3D, IMAX and Premium Large Format theaters have provided a major boost. IMAX theaters alone have delivered more than $100 million to the domestic total of “The Force Awakens,” and more than $155 million to its worldwide total.

“The Force Awakens” features Daisy Ridley and John Boyega in the key roles of Rey and Finn, along with original “Star Wars” alums Harrison Ford as Han Solo, Mark Hamill as Luke Skywalker and Carrie Fisher as General Leia. “The Force Awakens” is set 30 years after the events of 1983’s “Star Wars: Return of the Jedi.”

The production budget on “The Force Awakens,” from Abrams’ Bad Robot and Lucasfilm, was $200 million. Bryan Burk and Kathleen Kennedy produced along with Abrams, who shared screenwriting duties with Michael Arndt and Lawrence Kasdan. John Williams composed the score.

“Star Wars: The Force Awakens” passed “Furious 7” and “Marvel’s The Avengers” on the list of all-time top-grossing films at the global box office on Tuesday. After adding $21 million on Tuesday it is currently fourth with $1.56 billion, behind “Jurassic World” ($1.7 billion), “Titanic” ($2.2 billion) and “Avatar” ($2.8 billion).

The record opening by “The Force Awakens: has had it on pace to overtake “Avatar” since its debut, and most analysts believe the worldwide box office record is only a matter of time.