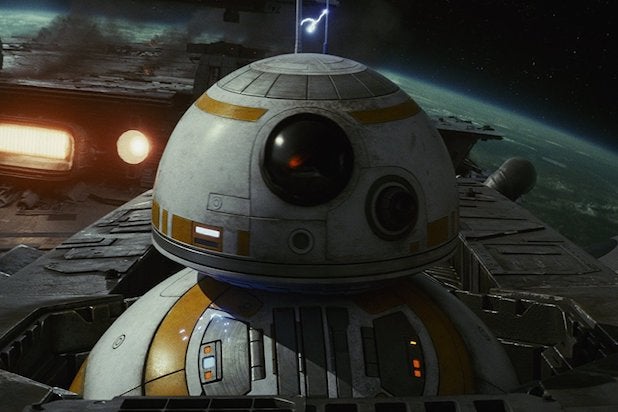 “Star Wars” fans have noticed one famous line present in all the films missing from “The Last Jedi,” but director Rian Johnson promises “it’s in there.”

“I have a bad feeling about this,” or some iteration, is present in every “Star Wars” film, from “The Phantom Menace” to “Rogue One” to, of course, “A New Hope.” It has become a classic, and fans are worried that Johnson didn’t continue the tradition.

Early viewers of the sequel are saying no human in the movie says they “have a bad feeling” about anything, but perhaps a certain rotund robot says the line.

Some fans are guessing that BB-8 tells fighter pilot Poe (Oscar Isaac) it’s got a bad feeling at the beginning of the film. The droid beeps something to make Poe reply, “Positive beeps only.”

Johnson responded to one’s fan inquiry about the line on Twitter, saying “It’s in there!” but didn’t give further specifics.

TheWrap has reached out to Disney in an attempt to solve this “Star Wars” mystery once and for all — but alas, the studio declined comment, wanting to leave the debate open for fans to solve.

In the meantime, check out more fan reaction below.

Hey – did someone say "I have a bad feeling about this"? I must have missed it. (If so please don't reply with details, so people get spoiled, be vague then DM me!) #StarWars #StarWarsTheLastJedi #TheLastJedi

BB-8 says "I got a bad feeling about this" in #TheLastJedi? @rianjohnson pic.twitter.com/UXmtCbgQR7

After plowing through the last 2.5 hours of the latest @starwars in my brain can someone tell me if anyone said, “I’ve got a bad feeling about this?” I just realized I don’t think I remember hearing it. #thelastjedi #nospoilers

@StarWarsExplain did anyone utter the classic "I have a bad feeling about this" line? Did I miss it? #LastJedi

Did I just miss it?! Help me Twitter wan kenobi! You're my only hope!

Possible TLJ SPOILER???//
Hey Ive seen TLJ three times and I have not once heard in the film ‘I’ve got a bad feeling about this’

All nerd things aside, no one said “I’ve got a bad feeling about this” in #TheLastJedi and that’s the biggest downfall of this movie ????????‍♀️