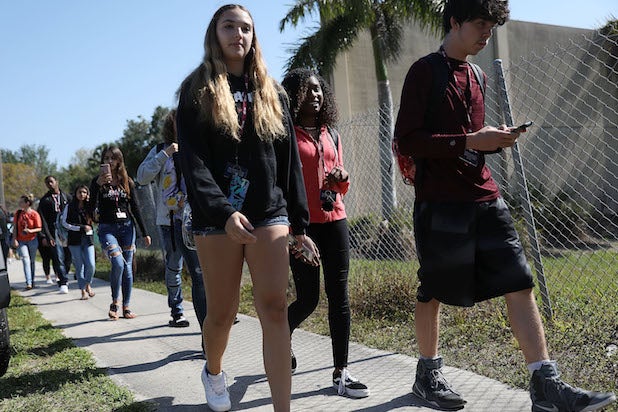 On the 19th anniversary of the Columbine school shooting massacre, students around the country have taken to the streets to protest gun violence as part of #NationalSchoolWalkout Day. And Hollywood stars are showing their support for the young activists.

Josh Gad, Julianne Moore, James Cromwell and George Takei were among the Hollywood set who cheered on the national protest on Friday.

“Your generation is the change our country so desperately needs right now,” Gad tweeted. “We have your backs & will not let you be silenced. It’s time to end the madness,” added the “Beauty and the Beast” star.

Today is a #NationalSchoolWalkout & I applaud every student who is taking a stance & saying enough is enough. Your generation is the change our country so desperately needs right now. Keep fighting. We have your backs & will not let you be silenced. It’s time to end the madness. https://t.co/dMyRaBMQt8

THREAD: Students at Warwick High School in Warwick, NY, had planned to participate in the National School Walkout on the 19th anniversary of the shooting at Columbine Hight School in Colorado. The purpose of the walkout is to bolster the discussion about gun-control measures.

So proud of the young people participating in the #nationalschoolwalkout today. They are using… https://t.co/ahZkSmRQWS

19 years after Columbine, we are still grappling with senseless gun violence in our schools. I stand with all those participating in today's #NationalSchoolWalkout to honor those who were lost and to fight for gun safety and #GunsenseNow. pic.twitter.com/ApjwBW1vr2

To the students of Parkland—and all the young people speaking out—you have my ear & my support. @BarackObama is right: “This time, something different is happening. This time, our children are calling us to account.” We’re with you. #NationalSchoolWalkout https://t.co/eQ9tRwzZSi

To the young people speaking up and speaking out today, my heart is with you. Keep walking and keep marching all the way to the polls in November. You will change America. #NationalSchoolWalkout

More than 2000 events have been planned across the country. Students sat in silence in front of the White House for 19 minutes — one for every year since Columbine. During last month’s national walkout, high school student Justin Blackman shared a photo of being the only student to have walked out of his school. But today he shared a photo along with a swarm of his fellow students now joining him.

Survivors from the shooting at Marjory Stoneman Douglas High School in Florida also walked out on Friday, and students Emma Gonzalez and David Hogg were among those leading the charge, sharing their own messages of support and solidarity.

I walked out so far I ended up in NY !❤️ Remembering Columbine today in our moments of silence, in servicing our communities, and in loving each other. Orange is the color for gun violence survivors, and we wear it today in solidarity of one another. pic.twitter.com/9SFSACvMlb

Remember after you guys walk out, volunteer! Spend the rest of your day working in your community. This is also a day of service in remembrance of the Columbine Victims. #NationalSchoolWalkout

Take a look at other images and videos of people reacting online to the protests:

#NOW: Students from Niskayuna High School walked out and made their way to the town hall next door for a rally. A bus of Schenctady students will join them. #NationalSchoolWalkout pic.twitter.com/xXmZoQaodg

The #NationalSchoolWalkout Moment of Silence and rally in front of the @WhiteHouse is over, and over a thousand students are marching the two miles to the @USCapitol! pic.twitter.com/c90QTN0ODE

It's so inspiring to see so many students stand up for common-sense gun safety laws at the #NationalSchoolWalkout. If you're a student who wants to get involved in the movement to end gun violence, text STUDENTS to 644-33. #StudentsDemandAction #ProtectOurSchools @MomsDemand pic.twitter.com/QGDxcSUr39

Seen at the #NationalSchoolWalkout rally at the US Capitol. #NeverAgain #EnoughIsEnough pic.twitter.com/g3pS2DEAj7

Today my school walked out in peaceful protest of gun control and in honor of the recent school shootings. Today’s generation wants change and we will be recognized.#ENOUGH #NationalSchoolWalkout pic.twitter.com/QUv8yCbrva