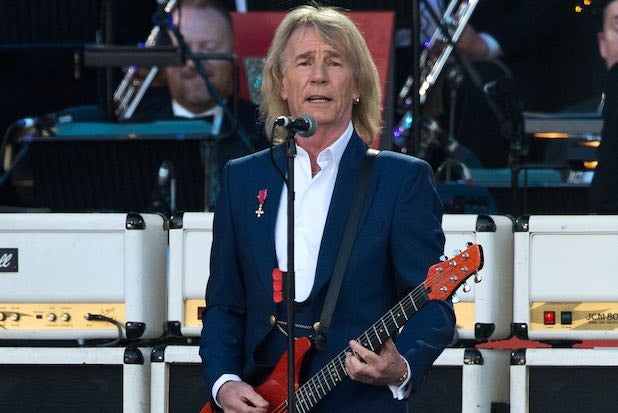 Rock legends are mourning the death of Status Quo guitarist Rick Parfitt, who died in a hospital in Marbella, Spain on Friday.

Parfitt’s manager, Simon Porter, said Saturday that he died from a severe infection after “having been admitted to hospital on Thursday evening following complications to a shoulder injury incurred by a previous fall.”

“We are truly devastated to have to announce that Status Quo guitarist Rick Parfitt has passed away at lunchtime today,” a statement on the band’s Facebook page read. “This tragic news comes at a time when Rick was hugely looking forward to launching a solo career with an album and autobiography planned for 2017 following his departure from Status Quo’s touring activities on medical advice.”

The statement continued, “He will be sorely missed by his family, friends, fellow band members, management, crew and his dedicated legion of fans from throughout the world, gained through 50 years of monumental success with Status Quo. Rick is survived by his wife Lyndsay, their twins Tommy and Lily and Rick’s adult children Rick Jnr and Harry. No further comment will be made at this time and Rick’s family, and the band, ask for their privacy to be respected at this difficult time.”

The guitarist for Status Quo, a U.K. band best known for hits “Rockin’ All Over The World” and “Whatever You Want,” is the latest in a long line of high-profile 2016 music deaths: Prince, Vanity, David Bowie, Leonard Cohen, Phife Dog, Merle Haggard, Maurice White and Glenn Frey were among the artists mourned.

Here are a few of musicians mourning the most recent loss today.

Our condolences to the family and friends of Rick Parfitt of @Status_Quo R.I.P. Rick.

Very saddened by the news of Rick Parfitt's passing. He was a lovely man not to mention a wonderful musician. #RIPRickParfitt

Parfitt joined Status Quo, a band that also includes Francis Rossi, John “Rhino” Edwards and Andy Bown, in 1964 when it went by the name The Spectres. The band adopted the name Status Quo in 1969, and broke through in the ’70s with the release of their album “Piledriver.” In 2015, the band passed a rare milestone after spending 500 weeks in the UK album charts.

Watch a live performance of “Whatever You Want” below: