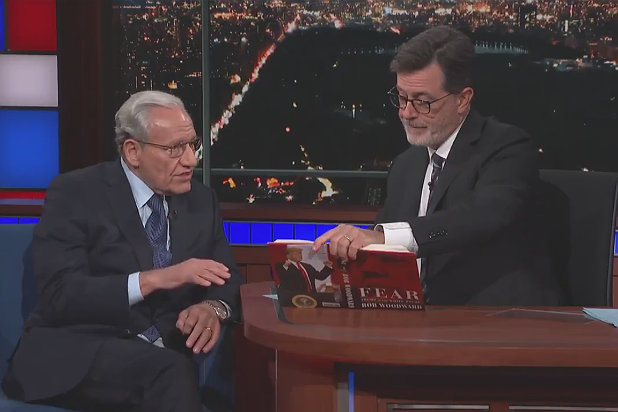 Bob Woodward visited “The Late Show With Stephen Colbert” on Monday to talk about his Trump tell-all book, which comes out Wednesday but has already rocked politics and media, thanks to bombshell details that have leaked.

Some of the more startling tales in “Fear: Trump in the White House” involve the things Woodward says administration officials have tried and failed to do to protect Trump from himself. And in a preview of the lengthier conversation posted to Twitter, Colbert and Woodward talked about one such example — the profane insult attributed to Trump’s ex-lawyer, John Dowd, that marks the book’s final sentence.

The line: “Dowd knew he could not bring himself to say to the president, ‘You’re a f—–g liar.'”

According to Woodward, Dowd, who resigned as Trump’s lawyer in March, came to that salty conclusion after a January practice interview to prepare Trump for an interview with special counsel Robert Mueller.

Earlier in the same segment, Colbert asked Woodward: “How will we know what’s going on, because the hallmark of this book is from day-to-day, [Trump] may not remember what his idea was yesterday?”

“That’s true. And that’s part of the problem,” Woodward replied.

Also Read: Kimmel: Trump Talks About the Woodward Book So Much 'He Must Be Getting a Piece of the Profits'

As for that quote above: “And that’s how you end the book? I think you buried the lede,” Colbert joked. Watch the whole thing below:

On #LSSC tonight: @StephenAtHome asks @realBobWoodward "WHAT MAKES YOU AFRAID" in terms of things he observed at The White House while researching his book #Fear.