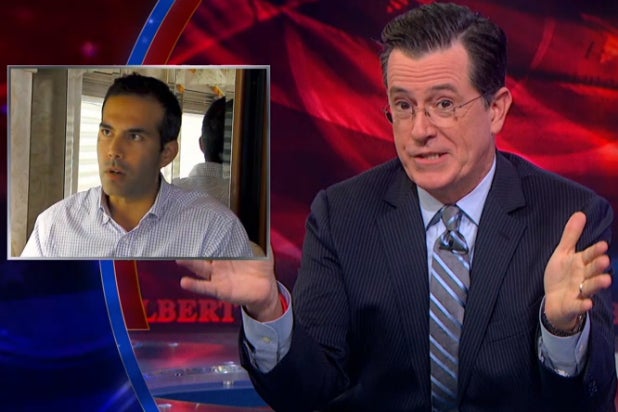 Stephen Colbert is fixated on one major repercussion of the Election Day GOP beatdown, saying goodbye to the global warming debate on Thursday’s show.

“You don’t have to worry about global warming anymore, because the Senate sure won’t,” the Comedy Central host quipped, now that the Democrats are outnumbered.

“The global warming believer is out and the global warming skeptic is in,” Colbert said of the likely Barbara Boxer-to-James Inhofe swap up top. “So finally the Environmental Committee can focus on important issues, like, ‘Who’s stealing all of our polar bears?'”

Colbert then blasted Inhofe’s global warming book, “The Greatest Hoax,” calling it “‘Harry Potter’ for people who thought ‘Harry Potter’ had too much science in it.”

Also read: ‘The Daily Show’ Has White People Explain Why Latinos Are So Damn Terrifying (Video)

The comedian then turned his ire — and jokes — to Texas Land Commissioner George P. Bush, nephew of George W. Bush. The new Bush on the block had pulled the classic “I’m not a scientist” line during an interview about global warming, something that didn’t sit well with even the conservative character.

And when the land commissioner was asked how much man has contributed to the rising sea levels, he punted.

“Everywhere from no impact at all, to 100 percent,” Bush said.

That led Colbert to retort: “How impressed am I? Somewhere between zero and 100 percent.”

Later, the soon-to-be CBS host performed a homemade experiment in an attempt to understand the rising sea levels for himself.