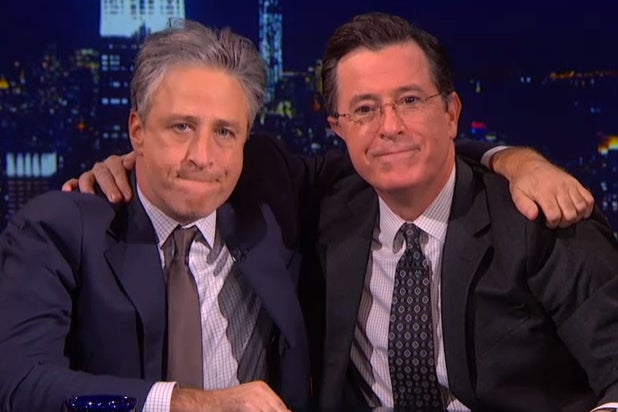 Stephen Colbert welcomed his frienemy Jon Stewart to “The Colbert Report” on Thursday night, where the two discussed their ex-mentorship with quite a bit of faux nastiness — at first.

“I used to be over there with your writers and their opium bongs,” Colbert recalled with his former boss, who he later referred to as his “old friend and nemesis.”

“How does it feel to know that your entire career could have just as well been shouted into a sock and thrown off an overpass?” Colbert asked his current Comedy Central colleague. “You have wasted your life.”

Of course, the two real-life pals won’t be on the same basic cable channel together for long. After a dozen more shows, Colbert will hang up his American flag pin to takeover CBS’s “Late Show.”

In the second clip posted below, things start to take a kinder turn, though the host of the “liberal, elitist” “Daily Show” clearly has very different political views than Colbert’s conservative character. The latter also doesn’t like the fact that the “liberal lion” Stewart can be good at two things at once.

Of Stewart’s directorial debut, “Rosewater,” Colbert said: “I’ve seen the film, and it’s a beautiful film, and that offends me.”

After the fake fighting, a beautiful, real moment was shared.

“I am so glad you are on my show before the show is over,” Colbert said to Stewart, as the two embraced on the same side of the interview table. “This is so lovely.”