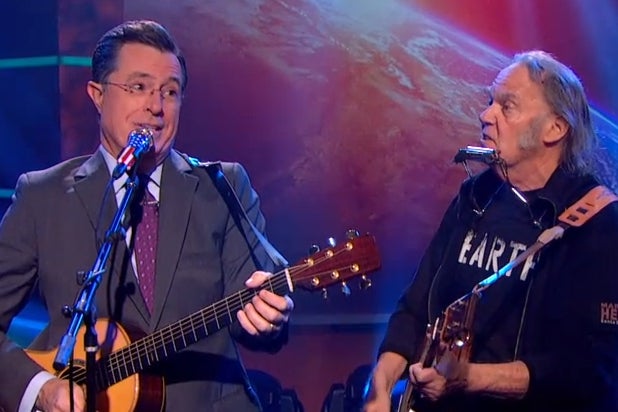 Stephen Colbert and Neil Young dueled on guitars and American flag microphones to figure out “Who’s Gonna Stand Up? (and Save the Earth)’ on Tuesday’s ‘Colbert Report.”

After a touching verse from the real singer/songwriter of the duet, imploring that rescuing the environment “all starts with you and me,” Colbert’s Comedy Central character took the unpopular stance.

“I know it feels good to save the Earth/but what if the dolphins attack us first?” Colbert sang. “Solar power is bound to fail/I say it’s time we frack the whales.”

Colbert later suggested that all environmental issues could be fixed by drilling the Continental Shelf. Young, playing the role of Mother Earth, was horrified.