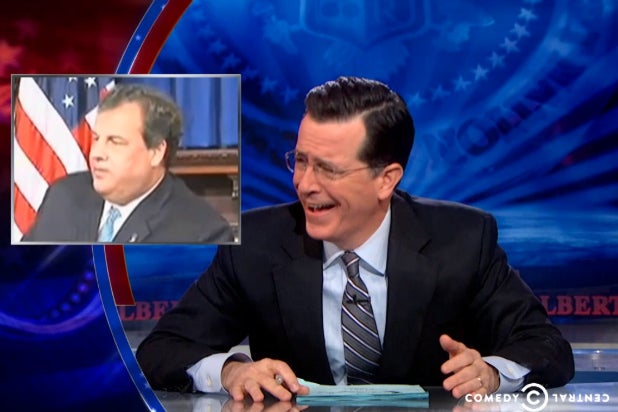 Following a montage of political pundits referring to Christie as “petty” and “small” — the latter of which the Comedy Central host joked marked “the first time that anyone has said that about Chris Christie” — Colbert piled-up on the scandal, which began when Port Authority officials shut down two of the three access lanes on the George Washington Bridge in September.

At the time, officials claimed that the coning off was for a secret traffic study, but emails reveal that it was actually political payback against Fort Lee, N.J.’s mayor, who refused to endorse Christie’s re-election bid.

Christie, who many considered to be a shoe-in for a 2016 Presidential run, claimed ignorance in a Thursday press event, which Colbert referred to as the “100 Year’s Press Conference,” the “32-Denial Pileup” and a “Someone Else-a Culpa.” Christie told reporters that he fired the high-level staffer who allegedly participated in — and lied about — the shenanigans.

While Colbert’s late night character agrees with Christie’s conservative politics, he is not a fan of the governor’s now infamous post-Hurricane Sandy elbow-rubbing with President Barack Obama. But the “Colbert Report” host can get behind the man’s apparent political strategy, which he summed up as: “It’s my way, or I shut down your highway.”