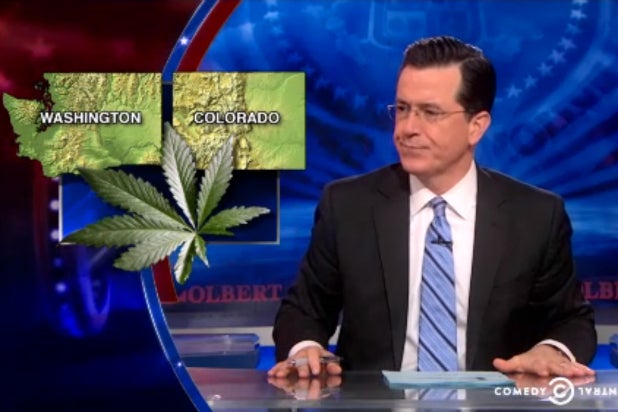 Stephen Colbert watched so much football on Sunday that he got a “contact concussion” — not that the true NFL superfan is complaining.

Of course, as a result of this past weekend’s games, the upcoming Super Bowl will feature the “Seattle Sad-Birds” (Seahawks) versus the “Denver Horse-Ghosts” (Broncos), who topped the “New England Face-Kites” (Patriots), Colbert recalled for those less in-tune than he to the gridiron game.

The man knows the game — if not the mascots so much — inside and out: “New England just could not respond to Denver’s bold strategy of scoring more points,” he expertly broke down.

And the Comedy Central host is not down with potheads taking over the game he so loves: “Before you know it, all the Super Bowl commercials are gonna be for munchies, and all the ads are gonna have freaky talking babies and animals,” Colbert said, surrounded by imagery of Doritos, Dominoes Pizza, eTrade and GEICO Super Bowl Ads past.

So, really, nothing will change.