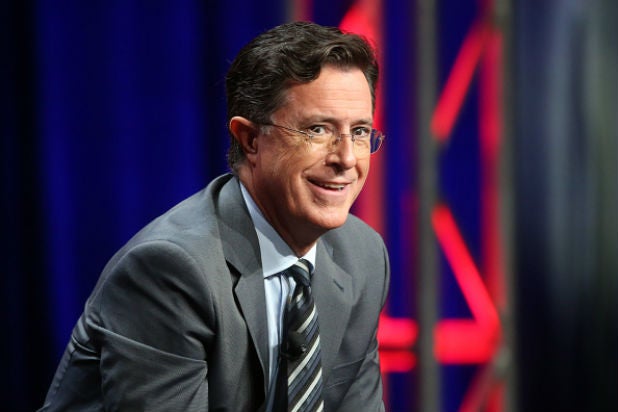 Stephen Colbert is hoping Donald Trump stays in the presidential race, if nothing else for the great comedic material, the “Late Show” host told reporters Monday at the TCA Summer Press Tour in Beverly Hills.

As for his new gig, Colbert said he chose September 8 as the start date for his “Late Show” run because it’s the day the presidential race traditionally starts. “Now I’m just hoping that certain people stay in the race until September 9. I’m not going to name any names, but let’s just say I want to do jokes on Donald Trump so badly, and I have no venue, so let’s just say right now I’m just dry-Trumping.”

The comedian then live tweeted the joke from the stage, much to the delight of the journalists in attendance. At the time of this publishing, the joke has been retweeted more than 1,000 times.

Also Read: Stephen Colbert Reveals Why He Dropped His 'Report' Character for 'The Late Show'

Colbert has already had fun at Trump’s expense, creating a viral video in which he spoofed Trump’s presidential announcement speech.

“Donald Trump’s campaign for President of the United States is not just great for America, it’s great for late-night television,” Colbert said in the video from June. “Donald’s Presidential campaign has inspired me, Stephen Colbert, to announce that I will still be hosting ‘The Late Show’ on CBS.”

Trump wasn’t Colbert’s only target Monday. He also live tweeted a joke about a journalist who cut off another reporter to ask a question. Colbert stopped the offender, who was actually from his new network CBS, before the guy could ask the question and tweeted, “Rude man in middle -show biz cores cbs.”

Can't wait to get on the air Sept 8th. Until then: #dryTrumping