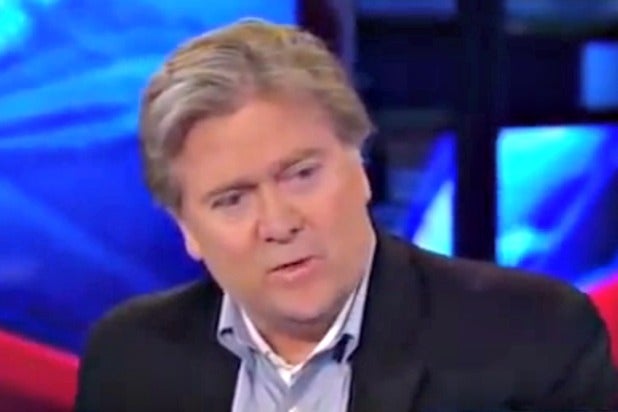 The world, including the political and media spheres, is up in arms about Donald Trump’s decision to appoint Steve Bannon his chief strategist and senior counselor.

Many were quick to point out that Bannon used to run Breitbart News, a website at the vanguard of the so called alt-right movement. The Anti Defamation League called Breitbart a “a loose-knit group of white nationalists and unabashed anti-Semites and racists.”

“Bannon’s ascension is the clearest sign yet that Trump will maintain his ties to the populist white nationalism that helped propel him to the White House against overwhelming opposition from party leaders and traditional media,” said says NBC’s Benjy Sarlin.

Michael D. Shear, Maggie Haberman and Alan Rappeport for the New York Times wrote that the appointment signals “an embrace of the fringe ideology long advanced by Mr. Bannon and of a continuing disdain for the Republican establishment.”

Trump announced on Sunday that Bannon, known for having founded Breitbart, will be his chief strategist and senior counselor. He left the website in August when he was named CEO of Trump’s campaign. At the time, other news outlets noted some of the headlines that characterized his tenure at Breitbart, including:

THERE’S NO HIRING BIAS AGAINST WOMEN IN TECH, THEY JUST SUCK AT INTERVIEWS

According to the Washington Post, former Breitbart editor Ben Shapiro, who worked closely with Bannon, called him a “legitimately sinister figure,” adding that many “former employees of Breitbart News are afraid of Steve Bannon. He is a vindictive, nasty figure, infamous for verbally abusing supposed friends and threatening enemies.”

Advocacy and hate-group watchdog Southern Poverty Law Center tweeted, “Stephen Bannon was the main driver behind Breitbart becoming a white ethno-nationalist propaganda mill” and “Trump should rescind this hire. In his victory speech, Trump said he intended to be president for ‘all Americans.’ Bannon should go.”

Trump should rescind this hire. In his victory speech, Trump said he intended to be president for “all Americans.” Bannon should go.

The Anti-Defamation League also voiced its concerns about the decision, writing that the “ADL strongly opposes the appointment of Steve Bannon as senior advisor and chief strategist in the White House. It is a sad day when a man who presided over the premiere website of the ‘alt right’ — a loose-knit group of white nationalists and unabashed anti-Semites and racists — is slated to be a senior staff member in the ‘people’s house.'”

“The appointment of Stephen Bannon as a top Trump administration strategist sends the disturbing message that anti-Muslim conspiracy theories and White nationalist ideology will be welcome in the White House,” said CAIR National Executive Director Nihad Awad. “We urge President-elect Trump to reconsider this ill-advised appointment if he truly seeks to unite Americans.”

“President-elect Trump’s choice of Steve Bannon as his top aide signals that white supremacists will be represented at the highest levels in Trump’s White House,” said Adam Jentleson, a spokesman for Nevada Sen. Harry Reid in a statement Sunday night.

However, Joel Pollak, who worked for Bannon at Breitbart, tweeted that Bannon is “an American patriot who also defends Israel & has deep empathy for the Jewish people.” He also told NBC News that he was not anti-semitic, racist or anti-woman.

I've known Steve Bannon as a close friend for nearly fifteen years. I've never heard or seen a racist word or action from him.

See below for more reactions.

The racist, fascist extreme right is represented footsteps from the Oval Office. Be very vigilant America.

With a white nationalist senior advisor, Trump is not just ignoring the impact of his rhetoric – he is actively terrifying the country.

You know what a principled conservative would do, Reince? Refuse to work in a WH with Steve Bannon.

Can't wait for next year's Menorah lighting ceremony at the White House. #SteveBannon

Steve Bannon, an anti-Semite whose website is a hub for white nationalism, will be the @WhiteHouse chief strategist. We are in trouble.