Trump strategist Steve Bannon pitched a movie in 2007 in which radical Muslims take over the country and turn it into the “Islamic States of America,” according to a treatment published by The Washington Post on Friday.

The eight-page outline of Bannon’s documentary film pitch warned of a “fundamental clash of civilizations.” According to the Post, the treatment proposes “a three-part movie that would trace ‘the culture of intolerance’ behind sharia law, examine the ‘Fifth Column’ made up of ‘Islamic front groups’ and identify the American enablers paving ‘the road to this unique hell on earth.'” 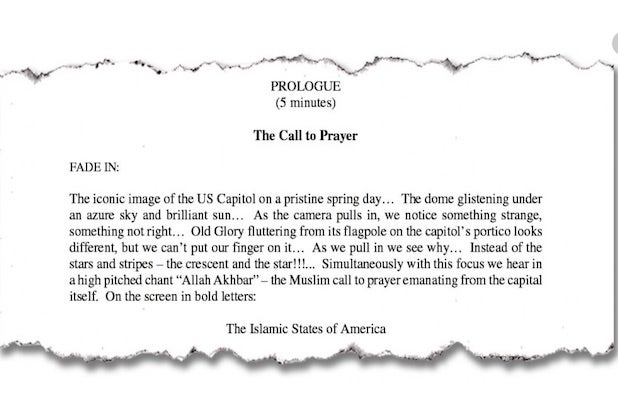 Also Read: ACLU: No, Steve Bannon, the Media Should Not 'Keep Its Mouth Shut'

“The road to the establishment of an Islamic Republic in the United States starts slowly and subtly with the loss of the will to win. The road to this unique hell on earth is paved with the best intentions from our major institutions. This political/accommodation/appeasement approach is not simply a function of any one individual’s actions but lies at the heart of our most important cultural and political institutions.”

“He actually sees the west in a war with these elements and he’s suggested that Islam in general is not a religion of peace, is something to be fearful of as Christians and as Americans,” Matea Gold, national political reporter for The Post, told MSNBC’s Joy Reid on Friday night.

“What I think is really fascinating about it is that it did not just focus on the threat of ‘radical Muslims,’ as the outline put it, but it really warned very darkly that Muslim community groups such as CARE were operating essentially as a fifth column, giving a chance for jihadists to sort of hide in our midst. And it warned that major institutions — the Washington Post, the New York Times, the CIA, America Jewish Community — were effectively appeasing some of these elements in society and allowing them to flourish.”

The outline is titled “Destroying the Great Satan: The Rise of Islamic Facism [sic] in America” and details “the rise of a global holy war — financed by the cash flow of oil — to attack and destroy western civilization.” It stresses: “the ideology is scary, and its ideologues will frighten small children as we bring to light an unbroken chain of ‘thinkers’ who epitomize the culture of hate.”

The Washington Post is one among many media outlets that have reported that Bannon had a strong hand in drafting Trump’s executive order last Friday that imposed a temporary ban on travelers from Iraq, Iran, Sudan, Somalia, Syria, Libya and Yemen. The Trump administration asserts that it is not a “Muslim ban,” but rather a target of countries whose citizens pose a threat of terrorist acts.

“Reading this outline 10 years later as this order is now being debated and its motives are being discussed is fascinating,” Gold said. “There’s no question that he is practically without peer in terms of influence in the White House, perhaps only the president’s son-in-law Jared Kushner has more influence and access to Trump.”