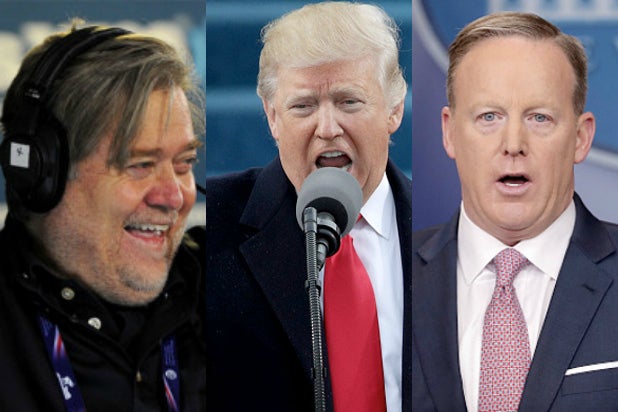 Chief White House strategist Steve Bannon’s demand on Thursday that the media should “keep its mouth shut and just listen for awhile” reflects the new Trump administration’s weakness and not its strength, media observers and journalism scholars told TheWrap.

“If Bannon didn’t care, then he would ignore all of it,” Al Tompkins, Poynter Institute’s senior faculty for broadcasting and online, told TheWrap.

“The opposite of love is not hate — it’s apathy. It matters and they know that this press coverage is killing their credibility,” Tompkins said. “Even their own supporters have to be raising questions.”

But media experts said that while Bannon’s tirade was harsh and confrontational — he told The New York Times, “The media’s the opposition party” — slamming the so-called fourth estate is nothing new in presidents even before the notoriously press-tweaking Donald Trump.

“This isn’t the first time the administration has attacked the media,” said Bill Wheatley, former NBC News executive and adjunct professor at the Columbia University Graduate School of Journalism. “I remember when Spiro Agnew called us ‘nattering nabobs of negativism.’ We were under attack during the Nixon administration. We just need to do our jobs. That’s what it’s all about.”

Political commentators and academics have been sounding alarm bells over the issue for some time, with some comparing the new administration’s tactics to those of tyrants of yesteryear.

Also Read: ACLU: No, Steve Bannon, the Media Should Not 'Keep Its Mouth Shut'

Veteran newsman Dan Rather has been posting daily observations on Facebook, telling Americans that “these are not normal times.”

University of California at Berkeley professor and former Labor Secretary Robert Reich has published a regular stream of watchdog tweets and blog posts, worrying that Trump is trying to “take over the truth.”

Trump’s fascistic tendencies are evident in almost everything he says and does as president. Last night in a… https://t.co/ZbKfInwOdR

“Donald Trump follows a simple strategy to take over the truth,” argued Reich in an article published in Salon earlier this week, saying Trump follows a two-step strategy.

“Step 1: Disparage the press and lie about them,” wrote Reich. “Step 2: Threaten to circumvent the press and take the ‘truth’ directly to the people,” he added.

“Independent press must find the truth, report it and hold Trump accountable for his lies,” he said in an effort to rally journalists to be vigilant in covering the new administration.

But perhaps surprisingly, Tompkins added, “I’m not worried. I believe there has not been a time in my life when journalists have mattered more, when things have moved as fast as they’re moving now.”

He continued: “The role of journalism is essential because the role of the government right now is so unclear. You have a massive exodus at the State Department, a pending trade war with Mexico and the pending dismantling of a very large health insurance system and it’s all happening too fast for regular citizens to make sense of it, so we need journalists now more than ever.”

Wheatley was also more sanguine: “My view is, steady as she goes. Our job is to find out things and report them and let the chips fall where they may.”

And despite his rage at mainstream media outlets, even Bannon admitted that he faithfully reads… The New York Times.