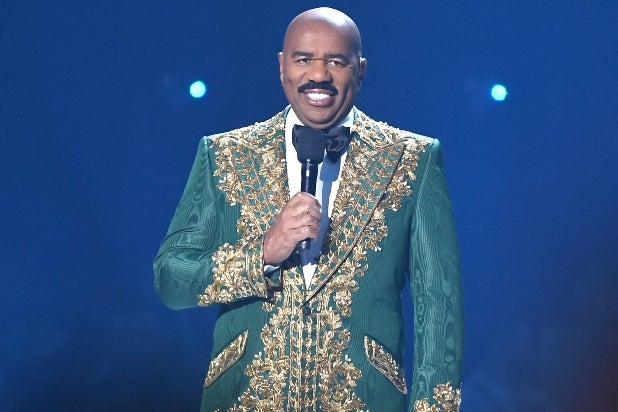 Steve Harvey just can’t catch a break — and neither can Miss Philippines.

The “Miss Universe” host called out the correct winner of the Miss Universe 2019 costume contest Sunday night, but through no fault of his own, the wrong contestant was standing beside him to accept the award.

The result was a confusing situation that brought to mind his famous 2015 flub in which Harvey mistakenly announced that Miss Colombia was that year’s Miss Universe, when the prize was really intended to go Miss Philippines.

Well, there must be something about the Philippines, because the country’s representative was dragged into the drama again this year when Harvey rightfully announced that Gazini Ganados of the Philippines was the winner of the costume contest — but she was nowhere to be found on stage.

Instead, Miss Malaysia, Shweta Sekhon, was in position next to Harvey. “It’s not Philippines, it’s Malaysia,” a confused Sekhon, said into the microphone beside a visibly uncomfortable Harvey.

But this year’s flub doesn’t appear to be Harvey’s fault. Miss Philippines’ picture was projected behind him, and, according to Harvey, her name was on the teleprompter.

“Well, let me explain something to you. I just read that in a teleprompter,” Harvey responded. “Y’all gotta quit doing this to me,” he added. “I can read. It said — Now, they’re trying to fix it now. See? This is what they did to me back in 2015. Played me short like that.”

Despite the mix-up, the rest of the night went smoothly and Miss South Africa, Zozibini Tunzi, was crowned Miss Universe 2019.

Harvey’s reps did not immediately respond to TheWrap’s request for comment Monday, but the host did tweet a series of motivational phrases.

“Quit tripping up every time something negative happens to you,” reads one tweet from Monday.

“Hate is louder than love, but love is stronger than hate. If you focus on those who love you, you can blow over the haters. Most people hate you only because of the way other people love you,” reads another.