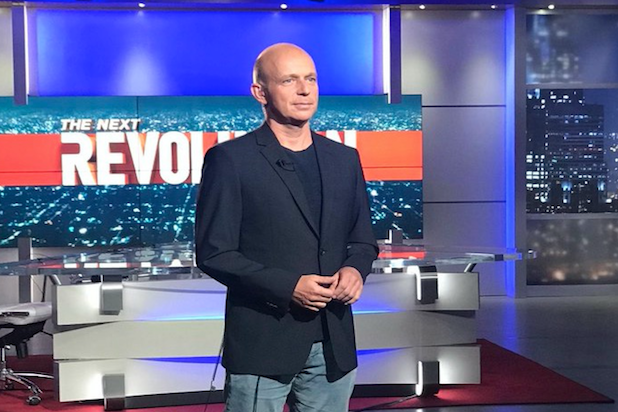 “I think it’s really a great way of demonstrating a commitment to the West Coast. One of the ideas of doing the show from here was to bring a bit of a West Coast feel to the channel,” Hilton told TheWrap. “They’ve done an incredible job to build a beautiful, modern, cool set.”

That new set, located at Fox News’ L.A. office, is expected to house other programs in the near future but Hilton is focused on “The Next Revolution.”

“TNR” aims to look at several different issues impacting the government and society, with a focus on the impact of the populist movement. On Sunday’s debut, Hilton speaks with Silicon Valley employees who haven’t opened up about their political views for fear of backlash.

However, he believes that if you dig a little deeper into Hollywood or Silicon Valley, it’s easy to find working-class people who are conservative or right-leaning when it comes to politics.

“There are people from all different political backgrounds, it’s just that it is increasingly difficult and increasingly risky to express their views publicly and that’s a terrible thing to be happening in America,” Hilton said.

The Fox News host plans to highlight “individualism” in his weekly show and admits he has had a hard time expressing his political views at various stops throughout his career.

“I’m very used to it, but I am equally committed to trying to change it and have a more reasonable political conversation where people can express their views without their motives being questioned,” Hilton said. “That’s what this is all about.”

The “story of our time” is the divide between the elite and everyone else.

“That’s really at the heart of this show,” he said. “We want to be the champion of working people who’s needs have been ignored for so long. Decade after decade, working-class people have an increasingly tough time and you’ve seen a complete collapse in economic security for around half the country and that story is not being told by most of the media.”

He said that the coastal elite media paints a picture that everything is “booming and great” but that is “so different from the reality” for many Americans. Hilton explained that this is a major problem because the story of America is told by media members who are living comfortably.

“That’s what Donald Trump articulated so successfully,” he said before explaining that his show will attempt to capture the populist movement.

The show will also feature a reoccurring segment called “SwampWatch,” in which Hilton examines President Trump’s pledge to “drain the swamp.”

“I’m really looking forward to causing intense irritation to the swamp dwellers in Washington, D.C.  every week because what we want to do with that segment is expose what really goes on,” Hilton said.

“The Next Revolution With Steve Hilton” premieres on Sunday, June 4 at 9 p.m. ET on Fox News.