Louise Linton, the actress wife of U.S. Treasury Secretary Steven Mnuchin, went on a bizarre tear on social media on Monday after she was called out for tagging all her clothes with designer labels on Instagram.

“Glad we could pay for your little getaway #deplorable,” jennimiller29 wrote on Linton’s Instagram page, noting Linton’s post naming designers like Valentino and Tom Ford she was wearing in the photo, taken when she and Mnuchin stepped off a U.S. government plane in Kentucky.

But things got really nasty when Linton replied.

“Have you given more to the economy than me andmy [sic] husband? Either as an individual earner in taxes OR in self sacrifice [sic] to your country? I’m pretty sure we paid more taxes toward our “trip” than you did,” she wrote.

Linton, a Scottish-born actress who married former Hollywood producer Mnuchin in June, flew into an odd rant about how much taxes they pay and their self-sacrifice, after which she thanked the woman for her “passive aggressive nasty comment.”

Predictably, her response earned her a string of ugly reaction on Instagram and other social media.

Here’s Linton’s entire spiel, which has since been taken down along with her previous posts.

“Aw!!! Did you think this was a personal trip?! Adorable! Do you think the US govt paid for our honeymoon or personal travel?! Lololol. Have you given more to the economy than me andmy [sic] husband? Either as an individual earner in taxes OR in self sacrifice [sic] to your country? I’m pretty sure we paid more taxes toward our “trip” than you did. Pretty sure the amount we sacrifice per year is a lot more than you’d be willing to sacrifice if the choice was yours. You’re adorably out of touch. Thanks for the passive aggressive nasty comment. You kids look very cute. Your life looks cute. I know you’re mad but deep down you’re really nice and so am I. Sending me passive aggressive Instagram comments isn’t going to make life feel better. Maybe a nice message, one filled with wisdom and hunanity [sic] would get more traction. Have a pleasant evening. Go chill out and watch the new game of thrones. It’s fab!” 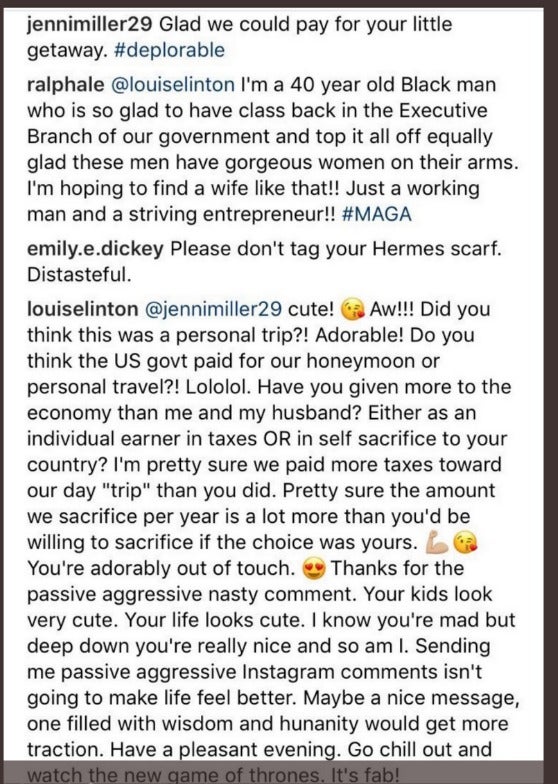 Among those high-priced, designer companies Linton tagged in her Instagram post were Hermès, Roland Mouret, Tom Ford and Valentino.

The Mnuchins had traveled that day to Louisville, where the treasury secretary was talking up Congress’ proposed tax code overhaul.

A Fortune Magazine analysis made in January estimated Mnuchin’s net worth is as much as $500 million.