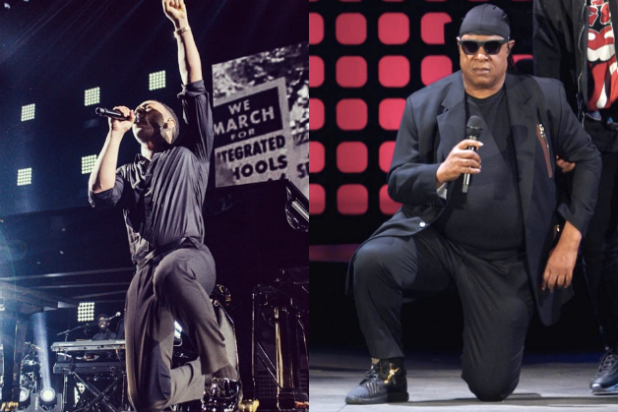 Not only are NBA and NFL players protesting President Donald Trump’s recent comments over athletes taking a knee during the national anthem, but musicians Stevie Wonder, John Legend and Solange Knowles all got down on one knee during concerts over the weekend in solidarity with players.

Trump set off a national firestorm on Friday when he suggested during a rally in Alabama that coaches should get the “son of a b—” players off the field if they continued to kneel. The comments triggered widespread protests from players, the league and coaches, many of whom condemned Trump’s comments.

In Hamburg, Germany, singer John Legend supported the athletes’ right to freedom of expression during his Darkness and Light Tour concert.

At the Hollywood Bowl in Los Angeles, Solange Knowles also dropped to one knee during her concert, too, according to fans in attendance.

Solange just took a knee while performing at Hollywood Bowl in support of Colin Kaepernick.

At a star-studded concert promoting unity following the unrest in Charlottesville, Virginia, over the weekend, Pharrell took two knees, saying, “If I want to get on my knees right now for the people of my city, for the people of my state, that’s what this flag is for.”

At the same show, also featuring the Dave Matthews Band and Ariana Grande, Justin Timberlake took a knee, too, and said, “Give yourselves a round of applause for making history. This is what unity does.”

And Stevie Wonder began his performance at the Global Citizen Festival concert in New York’s Central Park on Saturday night by announcing that he was “taking a knee for America.”

“Whenever you need to interrupt hate, stand down bigotry, condemn sexism and find love all of our global brothers and sisters everyday,” the legendary R&B singer said from the stage. “Tonight I’m taking a knee for America.”

Trump has stepped up his criticism of professional athletes like former San Francisco 49ers quarterback Colin Kaepernick who have declined to stand during the national anthem.

The president has repeatedly attacked what he called “the total disrespect certain players show to our country” and called on the NFL to fire such players.