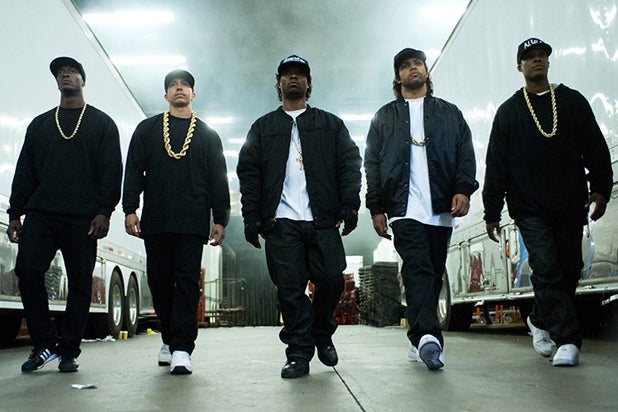 Universal Pictures and Legendary’s “Straight Outta Compton” will reach an estimated $200 million at the worldwide box office on Monday, the studio announced.

This marks Universal’s seventh film to reach the threshold in 2015.

The film’s current domestic gross is $161.1 million, with the international gross expected to be $38.9 million by end of day.

“Straight Outta Compton,” directed by F. Gary Gray and produced by Dr. Dre and Ice Cube, was the No. 1 R-rated August opening ever, and held that position at the North American box office for three weeks in a row.

The N.W.A-biopic stars O’Shea Jackson Jr., Corey Hawkins, Jason Mitchell, Neil Brown Jr. and Paul Giamatti. It opened on August 14 and grossed $60.2 million its opening weekend. The film had a $28 million budget, and follows the rise and fall of the hip hop group responsible for songs like “F-ck Tha Police” and “Straight Outta Compton.”

Universal Pictures has been having a record-breaking year. In August, the studio hit $2.11 billion in North American grosses. Moreover, the studio had five of the top ten highest-grossing films of the year, which include “Jurassic World,” “Furious 7” and Illumination’s “Minions.”

On Friday, former N.W.A manager Jerry Heller sued former clients Ice Cube and Dr. Dre for defamation, claiming that his portrayal in the film “Straight Outta Compton” was unfair, and that he didn’t give permission to use his likeness in the film.

Heller, who was portrayed by Giamatti, is also suing NBC Universal and Eazy-E’s estate, among others. Heller is asking for at least $110 million in the complaint.