“Stranger Things” star Millie Bobby Brown has apparently left Twitter. When TheWrap tried to access her verified account, @milliebbrown, on Wednesday, a blue Twitter page came up saying the page “doesn’t exist.” The page went missing after multiple images of the actress were turned into anti-gay tweets, culminating in a meme that gained steam on the social media platform.

Brown, who is only 14, became the subject of a series of Photoshopped images depicting her as homophobic, as well as a hashtag #TakeDownMillieBobbyBrown, which first appeared in November and resurfaced in June — coinciding with the beginning of Pride Month.

Also Read: Leslie Jones to Kelly Marie Tran on How to Deal With Racist Trolls: 'Expose the Worst of Them'

Here is an example of one of many anti-gay Tweets involving Brown on the platform: 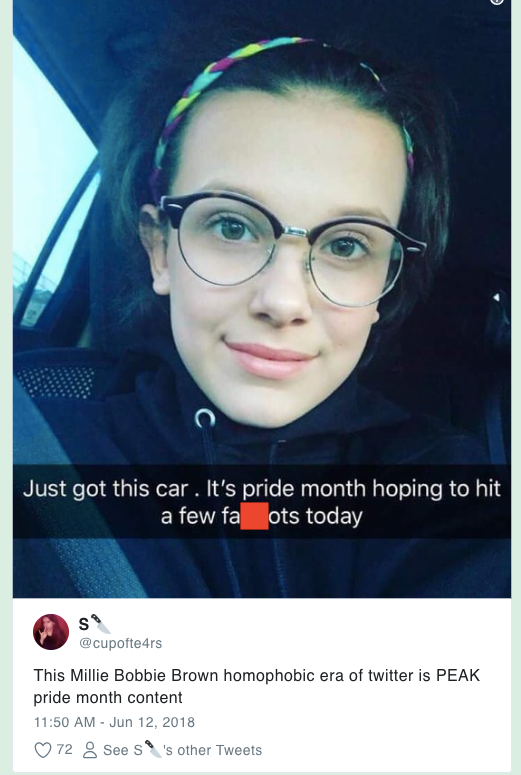 In reality, Brown is an active supporter of LGBT rights as well as an anti-bullying advocate. She wore an LGBT pin to the MTV Awards in 2017 and started a secondary Twitter account, @Milliestopshate, last summer to prevent bullying and cyberbullying.

Brown is active on social media, with millions of followers on both Instagram and Twitter. She is best known for her breakout role as the telekinetic teenager Eleven in the hit Netflix series “Stranger Things,” for which she received an Emmy nomination for Outstanding Supporting Actress in 2017. She will make her feature film debut in the upcoming 2019 “Godzilla” sequel, titled “Godzilla: King of the Monsters.” She is also the youngest person ever to feature on TIME’s list of the 100 most influential people in the world.

Many on Twitter attributed the images of the anti-gay meme to members of the LGBT community, suggesting it’s an in-joke among part of the gay community.

Brown’s fans were quick to come to Brown’s support in the wake of her apparent decision to deactivate her account.

all of y’all who deadass bullied millie bobby brown so much that she had to deactivate her twitter are disgusting, she is a CHILD ??? whats it like being an adult who bullies a fourteen year old girl?? jesus.

A representative for Brown did not immediately respond to TheWrap’s request for comment.