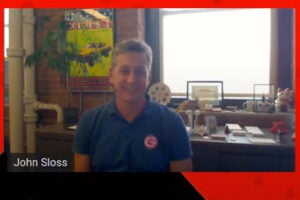 While traditional TV providers are losing steam, ad-supported streaming services are continuing to win over viewers — and that doesn’t appear to be slowing down anytime soon.

That was the key takeaway from The Streaming Revolution virtual panel on Wednesday at TheGrill. Danny Fisher, chief executive of FilmRise, the panel’s presenting sponsor, pointed out early on that AVOD services have spearheaded a “massive disruption” in the entertainment industry, where consumers have become “the decider of programming.”

In the past, the conventional wisdom, Fisher said, was that major studios created product and then persuaded their viewers to watch it. Now, the script has flipped. With so many choices — especially from ad-supported services like Roku and Xumo — there’s “been a sea change,” Fisher said, from viewers being dictated to, to consumers saying “you know what, we’re going to decide. We have so many choices… we’re going to watch what we want to watch.”

Rob Holmes, VP of Programming at Roku, agreed, before noting the company has been on a tear over the last year, adding 12 million monthly active accounts. Roku now has 43 million monthly accounts, Holmes said, but perhaps the more impressive figure was how much time Roku users spend watching shows. Last quarter, 14 billion hours of content were streamed on Roku, Holmes said, coming out to about 3.5 hours per day per active account.

Also Read: Half of Americans Pay for Two or More of the 'Big 4' Streaming Services

The fundamental driver towards ad-supported streaming, Holmes said, has been value; consumers have a limited budget, and after paying for their internet and cell phone bill, they’re increasingly realizing they don’t need to spend big bucks on a cable package to find quality programming.

“The rise of AVOD is really the other side of that coin,” he added.  “As consumers are recognizing they can get access to great content without paying, that’s really appealing to them.”

Another point in favor of streaming services, in comparison to traditional TV providers: there’s more room to adapt to what viewers enjoy, Xumo CEO Colin Petrie-Norris said, which has spurred the American AVOD market to about 70 million people so far.

“There is no constraint to the number of channels that can be added to a service,” Petrie explained. “It’s unlike traditional cable, where you have a fixed amount of real estate. These [services] are dynamic. We have a very malleable front-end — you can highlight channels to different users, you can adapt.”

That allows services like Xumo — which was sold to Comcast for $340 million earlier this year — to adjust to what their viewers want. Instead of having viewers get lost in a sea of content, their choices help foster better content surfacing and discovery.

“We like the idea of serendipity and algorithms sort of forming consumer choice,” Petrie-Norris said.

This has led him to watch a steady dose of “Cobra Kai” and other ’80s shows, he added. And earlier, Fisher pointed out “The Rifleman” — a show that went off the air during the Kennedy Administration — has been unexpectedly popular with viewers on The Roku Channel, signaling the unlimited real estate services offer helps breathe new life into old content.

This was music to the ears of Keith Le Goy, president of worldwide networks and distribution at Sony Pictures Television. “Come and get it,” Le Goy joked about Sony’s archive of content, as the panel discussed the extended shelf-life of old shows thanks to streaming.

Sony is in a “fortunate position,” Le Goy said, because it’s not looking to compete with other streaming services — and won’t for at least the next 5 years. Instead, Sony is looking to join forces with several services and get its content in front of as many viewers as possible.

“What we will be able to do is partner with everybody with our content,” Le Goy said. “That’s the position we took as the arms dealer of entertainment… for us we love that position, because it allows us to truly partner with everyone and really do what we can to help this business grow. Because the healthier this business is, the better it is for all of us.”

Does that mean theatrical releases will continue to be deemphasized by studios in favor of streaming releases? Not exactly. Le Goy said big-budget productions like “Spider-Man” and “Jumanji” are still better off hitting the theater first before moving on to streaming services. And as Fisher put it, the theater will evolve into more of a “social event,” with dinner and cocktails included. But that evolution is necessary, in large part due to the success streaming services have had in winning over viewers.