Harry Sloan is out as CEO of MGM, the company announced on Tuesday, putting in his place a financial turnaround expert whose job it will be to restructure the company’s crushing $3.7 billion debt.

The board of directors made the decision after months of attempts to raise more capital and two days of meetings that ended in Sloan’s ouster on Monday night, a studio spokeswoman said. His departure comes one year after he signed a three-year extension on his contract.

In a press release, MGM said that Sloan will continue in the role of non-executive chairman and stay on the studio’s board of directors.

"Steven will come in and work on a business plan with us," said Parent in an interview with TheWrap. "I’m proud of the slate. I’d like more production money, but the focus is on the restructure. And I’m glad we’ve been able to get six movies up."

"The decision was made that with the weight of the debt structure, this is not Harry’s forte," said a studio executive who declined to be identified. "Harry is an entrepreneur. He inherited a heavily-leveraged company. If Mary is going to get in there and make movies, they need someone to restructure the balance sheet." 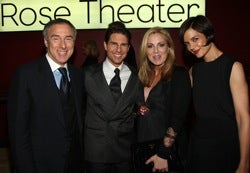 Cooper has won a reputation for turning around companies including Krispy Kreme and Enron. He will be tasked with restructing MGM’s massive debt in order to allow Parent to make movies, which so far she has been too cash-strapped to do.

Parent has privately expressed frustration that she has movies prepped for a greenlight, but has not had the capital to move forward with a slate.

MGM has not had a major film since Christmas hit "Valkyrie," which has taken in $200 million worldwide; next up on its slate is a remake of 1980’s "Fame," scheduled for release on Sept. 25. (See list of MGM’s upcoming films.)

MGM will begin production in September on "Red Dawn," a remake of a Cold War-era thriller, using funds from United Artists. And it will commence production on "Zookeeper," starring Kevin James, a coproduction with Sony.

Of course, MGM’s crown jewel is its 4,000-title library, which consists of many of the James Bond films," "Rain Man," "Hannibal" and "The Birdcage."

MGM has amassed a crushing load of debt owed to some 140 creditors, a portion of which comes due as early as 2010.

Most of the $3.7 billion in debt, which incurs an estimated additional $250 million per year in interest fees, is due in 2012. The studio recently hired investment bank Moelis & Co. to help restructure the debt with a committee of creditors led by JP Morgan Chase & Co.

For the better part of 2009, the company has been trying to close in on fresh capital, with executives routinely saying it was on the brink of securing funds which have not materialized.

MGM, one of Hollywood’s most historic major studios, has had a turbulent history in its latest incarnation.

But in 2006, the company said it wanted to return as a distribution company and signed deals with many independent companies, including the Weinstein Company and Bauer Martinez. Films that were released included "Lucky Number Slevin," "Bobby" and "Clerks II."

The biggest move in 2006, however, came when the studio brought in Tom Cruise and Paula Wagner to run its United Artists unit.

That reign ended in 2008, when Wagner left, though Cruise still stayed on, in name only, as a producer.

Up until the MGM uphill slog, Sloan was known as a business whiz who took over Roger Corman’s New World Pictures in 1983 and served as Chairman and CEO until 1989, when he sold the company.

In May, TheWrap reported that Ryan Kavanaugh’s film company Relativity Media was aiming to take control of a major portion of MGM.

Asked if such plans were still afoot, Parent called this a "high-class problem."

"I think there’s a lot of people interested in MGM," she said. "It’s nice to have people who want to be associated with us."

Cooper was named an independent member of the supervisory board of LyondellBasell Industries and chairman of its restructuring committee in April of this year.

He recently served as the CEO of Hawaiian Telcom and provided management services to American Home Mortgage.

Other recent engagements include serving as executive chairman of Blue Bird, a leading bus manufacturer, and chairman of the board of auto supplier Collins & Aikman. In 2005 Steve was CEO of Krispy Kreme Doughnuts; from 2002-2005 he served as CEO and CRO of Enron.