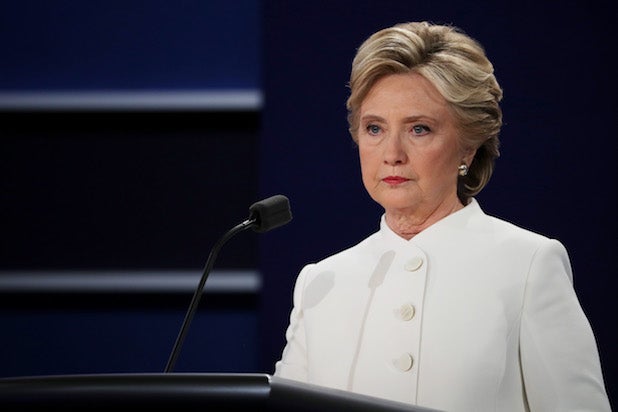 There’s no love lost between Donald Trump and Hillary Clinton — and there wasn’t even a handshake to open up Wednesday’s final presidential debate — but one insult really landed hard.

Trump called Clinton “Such a nasty woman” in the midst of the heated debate, and the internet went wild.

The insult came during Clinton’s answer to how she would address mounting entitlement costs.

“My Social Security payroll contribution will go up, as will Donald’s — if he can’t figure out how to get out of it,” she replied, to which Trump interrupted by saying, “Such a nasty woman.”

While Clinton seemed unfazed, the Twitterverse took notice, especially in the wake of past lewd comments Trump has made about women recently coming to light.

Chelsea Handler asked the question of the night: “Are you a bad hombre or a nasty woman?”

Are you a bad hombre or a nasty woman? #Debate

“The sexual predator mumbles under his dirty breath, ‘Such a nasty woman,'” “TrumpLand” filmmaker Michael Moore wrote, referring to allegations from a number of women who say Trump has groped or physically attacked them.

The sexual predator mumbles under his dirty breath, "Such a nasty woman."

While many others harked back to Janet Jackson‘s 1986 hit “Nasty” for inspiration.

Trump: "nobody respects women more than I do"

Also Trump: "such a nasty woman"

American women when they heard Trump say "such a nasty woman" pic.twitter.com/V0pB0U801X

Such a nasty woman pic.twitter.com/e9YcVQEbze

"she's such a nasty woman" SOMEONE DRAG HIM OFF THE STAGE WHAT HAPPENED TO NO ONE HAS MORE RESPECT FOR WOMEN THAN ME pic.twitter.com/klQYQA00y5

You know what a #NastyWoman is good at? Voting. #debate pic.twitter.com/T4DDbNC8cY

How do you think Trump is gonna feel when all the "nasty women" get out and vote on November 8th? pic.twitter.com/Hc4YkialER

"Such a Nasty Woman" is my new battle cry.