Marion “Suge” Knight’s business was one of running the West Coast rap game and intimidation tactics — and for years, business was good.

Knight co-founded Death Row Records with Dr. Dre in 1991, and his street savvy combined with business acumen helped score chart-topping hits with some of the biggest names in hip-hop including Tupac Shakur and Snoop Dogg.

But after a series of jail stints, the shooting death of Shakur and Dr. Dre’s departure from the label, Knight’s life as a shot caller crumbled. The music mogul now sits in a Los Angeles jail cell facing a murder rap and the possibility of life behind bars.

Knight is shown at his arraignment at Compton Courthouse on Feb. 3, 2015 (Getty Images)

Here is a timeline of the Compton native’s troubled past.

1990: In a story that quickly becomes legend, Knight allegedly dangles rapper Vanilla Ice off of a hotel balcony over a stake in royalties from Ice’s debut album purportedly owed to an associate. While Knight has repeatedly denied the account, Ice signs over a portion of the record’s publishing rights, which he later claims underwrote the launch of Death Row Records.

July, 1992: Knight is charged with assault and robbery for pistol-whipping two men during an altercation at Solar Records in North Hollywood. Knight is later convicted, given a five-year suspended sentence and ordered to serve one month in a halfway house.

Aug. 1995: The West Coast kingpin sparks a bicoastal rap war at the Source Awards in New York. As he hits the stage, the music mogul fires a verbal shot at Bad Boy Records founder Sean Combs (then known as Puff Daddy). “Any artist out there that want to be an artist and stay a star, and don’t have to worry about the executive producer trying to be all in the videos, all on the record, dancing… come to Death Row!” Knight tells the shocked East Coast crowd.

Sep. 1996: Cameras at the MGM Grand Hotel in Las Vegas capture Knight and his crew, including Tupac Shakur, beating a man. Hours after the assault, Knight is behind the wheel of a BMW when his passenger Tupac is shot multiple times in a drive-by. Tupac dies six days later, and his murder is never solved. Knight is eventually sentenced to nine years in prison for violating his probation during the hotel scuffle.

Mar. 1997: Christopher “Notorious B.I.G.” Wallace is killed in a drive-by shooting shortly after leaving a music industry party in L.A. Mounting tensions between Bad Boy and Death Row coupled with the murder of Tupac six months earlier make Knight a person of interest in the case. The music mogul is never officially tied to the shooting. However, retired LAPD detective Russell Poole, who worked on the Smalls murder case, told CNN in 2011 that he believes Knight “ordered the hit.” The case is never solved.

Jul. 2003: After sucker-punching a parking lot attendant outside a Hollywood nightclub, Knight is sent to prison for 10 months for violating his parole.

Aug. 2005: While attending an MTV Video Music Awards pre-party in Miami thrown by Kanye West, Knight is shot in the leg and claims he was robbed of $147,000 as well as a 15-carat diamond earring. 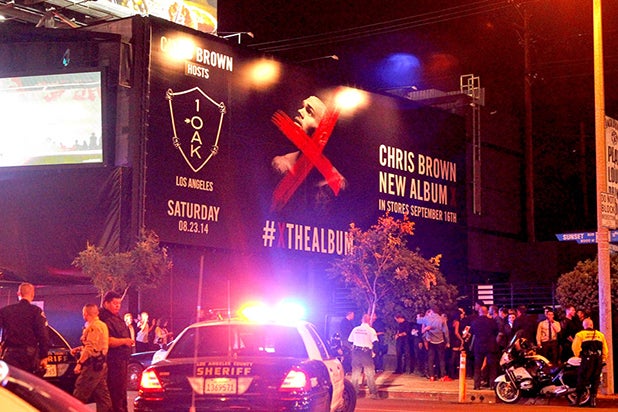 Police respond after Knight is shot at a party hosted by Chris Brown on August 24, 2014 (Twitter)

Apr. 2006: Knight files for bankruptcy and declares both himself and Death Row Records broke. He claims debts of more than $100 million in the bankruptcy filing to avoid losing the music label to former business associate Lydia Harris, according to Legalzoom. Harris claimed she was cheated out of a 50 percent stake in the label, and was awarded a $107 million civil court judgment prior to Knight’s bankruptcy filing.

Nov. 2008: Knight is charged with two counts of felony drug possession and one count of misdemeanor battery after allegedly beating his naked girlfriend of three years while brandishing a knife in a Vegas parking lot. Despite the available eyewitness testimony of two officers, no formal charges are ever brought due to the girlfriend’s failure to cooperate.

Feb. 2009: After a 3 a.m. fracas at a private party in Arizona, Knight is sent to the hospital with facial injuries. Two men are arrested in connection with his beating — one of whom identifies himself as Akon’s business manager.

Aug. 2014: Knight and two others are shot at a party hosted by R&B singer Chris Brown at 1 OAK LA nightclub on Hollywood’s Sunset Strip. The incident marks Knight’s second MTV VMAs pre-party to end with a gunshot wound.

Oct. 2014: A celebrity photographer accuses Knight and comedian Katt Williams of stealing her camera in Beverly Hills, leading to the two stars’ arrests. Knight’s criminal history puts him at risk of 30 years in prison if convicted. The two plead not guilty in the ongoing case.

Feb. 2015: The fallen music mogul pleads not guilty to murder and attempted murder charges after allegedly killing one man and injuring another during an altercation in a Compton parking lot. According to the Los Angeles County District Attorney’s office, Knight barreled into the men with his truck and then drove away. The incident happened near a promotional shoot for the upcoming Universal film “Straight Outta Compton.” Because of his prior convictions, this would be a third-strike case. If convicted, Knight — whose “not guilty” plea was followed by a trip to the hospital for an undisclosed “medical emergency” — faces life in prison.