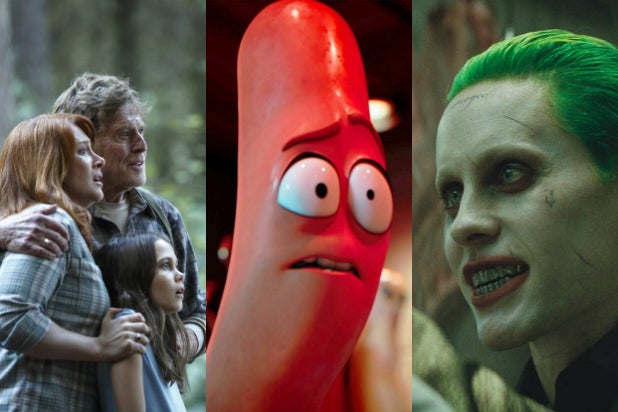 Assuming the drop is somewhere between 60 and 65 percent, “Squad” will still make roughly $50 million this weekend. And if a few chips fall its way, the David Ayer-directed film could eclipse “Batman v Superman’s” second weekend, which netted $51.3 million.

Though not quite as big as a typical Disney-Marvel second weekend, seen most recently with “Captain America: Civil War,” it’s still pretty massive for the anti-hero-themed production, which was made for $175 million. Incidentally, the Will Smith-Margot Robbie ensemble flick has amassed a whopping $280.1 million globally so far.

This weekend’s “Squad” estimate is leaps and bounds higher than what experts are predicting for newcomer “Pete’s Dragon,” starring Bryce Dallas Howard and directed by David Lowery. The new version of Disney’s 1977 original is expected to end its three-day opening somewhere north of $25 million. But if reviews remain as positive as its current 84 percent Rotten Tomatoes score reflects, it could ultimately come in closer to $30 million.

Also Read: This Is What 'Suicide Squad' and Donald Trump Have in Common (Video)

That’s not bad at all as the film rang up just $65 million in production costs.

Animated raunch fest “Sausage Party,” featuring Seth Rogen and a slew of other big names, is expected to come in at No. 3 this weekend with grosses landing somewhere north of $20 million. Sony, the film’s distributor, expects millions in the low-to-mid teens, however.

Estimates on the film range wider than usual because it doesn’t have a comparable forbear from the past three years. The last widely released R-rated animated comedies were 2004’s “Team America,” which debuted to $12.1 million, and 2011’s “Paul” — also featuring Rogen, as an animated alien — which opened to $13 million.

“Sausage Party” is opening in more than 3,000 theaters and receiving good buzz, according to Fandango’s “Fanticipation” survey, which shows the film outranking “Pete’s Dragon” in the No. 2 spot behind “Squad” among 1,000 moviegoers surveyed. And if it benefits from its current Rotten Tomatoes score of 93 percent (though that score could change significantly in the coming days), the movie about personified food could wind up being something of a mid-level summer sleeper hit.

Meryl Streep and Hugh Grant‘s turn in Stephen Frears‘ “Florence Foster Jenkins” won’t make big bank, with predictions of less than $10 million. But with a current 91 percent on Rotten Tomatoes, it has a shot at some awards-season buzz if the glowing reviews keep streaming in. The Paramount, Pathé and BBC Films feature follows the life of the 1940s New York heiress after whom the film is named and her awkward attempt at becoming a great singer.