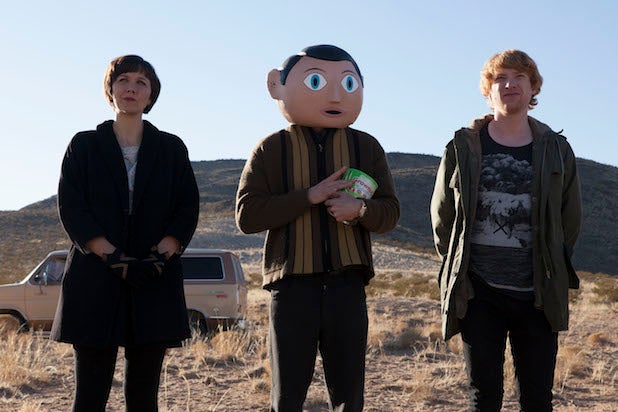 Lenny Abrahamson (“What Richard Did”) directed from a script by Jon Ronson (“The Men Who Stare At Goats”) and Peter Straughan (“Tinker Tailor Soldier Spy”).  Magnolia is eyeing a summer 2014 theatrical release for the film.

Gleeson plays Jon, a wannabe musician who finds himself out of his depth when he joins a maverick pop band led by the enigmatic Frank (Fassbender) — a musical genius who hides himself inside a large fake head — and his terrifying sidekick Clara (Gyllenhaal). It is a fictional story loosely inspired by Frank Sidebottom, the persona of cult musician and comedy legend Chris Sievey, as well as other outsider musicians such as Daniel Johnston and Captain Beefheart.

“Frank” was produced by Ed Guiney, David Barron and Stevie Lee, and executive produced by Tessa Ross, Katherine Butler, Andrew Lowe and Nigel Williams. The film is an Element Pictures/Runaway Fridge production for Film4, BFI, Protagonist Pictures and the Irish Film Board.

“All of us at Magnolia were completely taken with ‘Frank,'” said Magnolia president Eamonn Bowles. “It reaffirms the considerable talents of Lenny Abrahamson, who has delivered a beautiful, poignant and hilarious film that speaks on many levels about being an artist. That Michael Fassbender can be so affecting while encased in a papier-mâché head proves that he is one of the greatest actors working today.”

“I’m delighted that ‘Frank’ has found a home in the U.S. with Magnolia. Eamonn Bowles was an early fan of my first film, ‘Adam & Paul,’ and I know that the team there has a genuine passion for ‘Frank.’ Along with their skill and experience this makes them the right partners to bring the film to its audience here,” said Abrahamson.

Also Read: Sundance Video: Hollywood Torrent’s Best of the Fest – ‘The Raid 2’ and a 2-Year-Old (Video)

“Magnolia is an incredibly innovative and exciting company and we have long wanted to work with them. They are the perfect partners for ‘Frank’ and we could not be happier that we have landed with them and we are very excited about their plans for the U.S.,’ added Guiney.