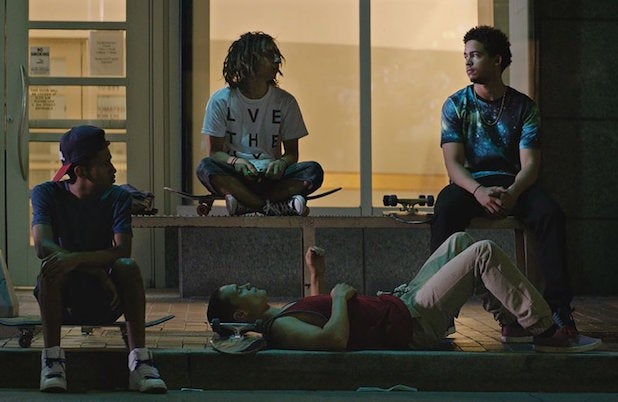 IFC Films has acquired U.S. rights to Steven Caple Jr.’s “The Land,” which recently premiered at the Sundance Film Festival in the NEXT section and will be released in the second half of 2016.

In “The Land,” four teenage boys devote their summer to escaping the streets of Cleveland, Ohio, by pursuing a dream life of professional skateboarding. But when they get caught in the web of the local queenpin, their motley brotherhood is tested, threatening to make this summer their last.

The deal reunites IFC Films with producers Friedman, Lauder and Little, who previously worked together on “The Stanford Prison Experiment.” That film also premiered at Sundance, where it won the Alfred P. Sloan Feature Film Prize and the Waldo Salt Screenwriting Award.

“With his film ‘The Land,’ Steven Caple Jr. continues Sundance Selects and IFC Films’ long history of bringing the best of first time filmmakers to the big screen. ‘The Land’ is an authentic and heartfelt drama and we’re delighted to be working with Steven on his amazingly touching debut feature,” said Jonathan Sehring, president of Sundance Selects/IFC Films.

“After such a successful experience on ‘The Stanford Prison Experiment,’ we are thrilled to be teaming up with IFC Films again on ‘The Land.’ It’s an incredibly special film, and the team at IFC Films understand the passion behind Steven Caple Jr.’s visionary and honest debut,” producers Lizzie Friedman, Karen Lauder and Greg Little added in a joint statement.

The deal was negotiated by Arianna Bocco, SVP of acquisitions from Sundance Selects/IFC Films, with WME Independent on behalf of the filmmakers.