UPDATE SUNDAY P.M. The Washington Post is reporting that Sony/ATV Music Publishing, co-owned by Michael Jackson and Sony, will be keeping control of the many Beatles songs owned by Jackson.

Previous reports said that Jackson, in death, would be relinquishing ownership of the tracks to Paul McCartney. The company owns rights to more than 200 songs written by McCartney and John Lennon (among many other artists’ songs, including some from Bob Dylan and Neil Diamond.)

It had been reported that Jackson left the songs to McCartney in his will in order to repair a rift in their relationship. The two had not spoken since a bidding war left Jackson with ownership back in 1985; he paid $47.5 million, and the stake apparently is worth more than $1 billion today.

In L.A., Al Sharpton met with members of the Jackson family at their Encino compound. Sharpton flew into Los Angeles Sunday at the request of Michael Jackson’s brothers to help plan memorials for the singer.

Sharpton said they would like to plan global events paying tribute to the pop star.

His visit follows Jesse Jackson, who said over the weekend that the family was concerned about the medical care Michael Jackson had recently been receiving.

Meanwhile, a lawyer for Michael Jackson’s physician, Dr. Conrad Murray, said that reports that the doctor injected the pop star with a powerful painkiller before his death were “absolutely false.”

Edward Chernoff, the attorney for Murray, said Jackson was unconscious when the doctor entered Jackson’s bedroom.

UPDATE SATURDAY P.M.: Janet Jackson was at her brother Michael Jackson’s home in Holmby Hills, where moving vans were taking dollies and packing equipment through the gates, the Associate Press reported. It wasn’t known what was being taken out.

Also on Saturday, the Reve. Jesse Jackson has said the Jackson’s family wants a private autopsy because of unanswered questions about how he died. "It’s abnormal," he said. "We don’t know what happened. Was he injected and with what? All reasonable doubt should be addressed."

After delaying two hours, the L.A. County coroner finally said Friday said that there were no medical signs of foul play in the death of pop star Michael Jackson and that further testing — including toxicology — would take place on his body.

Those tests are expected to take four to six weeks, the coroner spokesman Craig R. Harvey said. "At that time, we anticipate being able to close the case and issue a final cause of death," Harvey said.

He refused to say whether Jackson had taken Demerol, but did say, "We know he was taking some prescription medications. We can’t say what type." 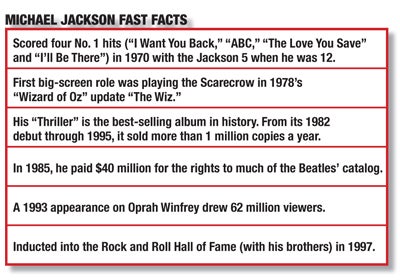 And though they insist they are conducting a “medical” investigation, not a “criminal” investigation, police Friday night were questioning Dr. Conrad Murray, a Las Vegas cardiologist, who was reportedly with Jackson Thursday. And a BMW registered to Murray’s sister has been towed from in front of Jackson’s home. Police suspected it might contain evidence that would assist in the coroner’s investigation.

Harvey also said that the coroner’s office was brought in because there was no doctor at the scene when paramedics arrived Thursday at Jackson’s Holmby Hills estate.

Jackson, the troubled 50-year-old King of Pop, was pronounced dead at 2:26 p.m. by doctors after arriving at UCLA Medical Center in a deep coma.

Frank DiLeo, Jackson’s longtime manager, said Jackson has a will but was not aware of its contents. He anticipated that the children would remain with their grandmother.

But a behind-the-scenes battle is looming over the fate of the children. Child Services investigators are already looking into the backgrounds of prospective custodians inside Jackson’s family. The authorities will also be looking into the background and fitness of Debbie Rowe, the mother of Jackson’s first two children and his wife from 1996 to 1999. Rowe initially gave up her custody rights to their father but in 2006 regained those rights, setting the stage for a custody battle and millions of dollars in child support payments from the singer’s estate.

The mother of his third child, Blanket, has not emerged publicly to assert any claims, nor has any information surfaced about the details of her paternity deal with Jackson.

Jackson also was married to Lisa Marie Presley from 1994 to 1996. Presley, of course, is the daughter of another music legend, Elvis Presley, who died in 1977 at age 42, of a cardiac arrest brought on by drug abuse.

Most recently, Jackson had been in rehearsals for the massive 50-concert comeback series at London’s O2 Arena, which was to have originally started July 7. At the end of May, the first show was pushed back to July 13 and three of the shows canceled.

At the time, a longtime family adviser told TheWrap that the singer was “physically, emotionally and professionally unable to perform” for the 50-night engagement — and that Jackson had actually shown up only twice at the rehearsals. When he did show up, the family insider said, Jackson appeared to be “lethargic.”

Indeed, recent photos of Jackson shopping in  Bel-Air (above) showed the King of Pop’s painfully thin frame swam inside a black silk morning coat. Jackson, his chin and cheekbones jutting out, looked nothing like a pop star about to embark on a strenuous tour.

Producer Gary Pudney, a longtime friend of Jackson’s, blamed the heart attack on the singer’s unrelenting quest to make his comeback tour dates.

“He had been working his butt off,” said Pudney, a former ABC executive who produces the World Music Awards in Monte Carlo. “It’s been very strenuous, and he has been working out and lifting weights and getting ready, but this guy’s body has been through a lot of abuse, especially with drugs and other stuff.”

Jackson insiders and family members have long maintained that the singer has abused a range of prescription medications ranging from Vicodin to Oxycontin. He also battled with an alcohol problem.

Firpo Carr, a longtime Jackson family friend and a former spiritual adviser to the singer, also said Jackson had been pushing himself. He added that Jackson had had a prescription medication problem for many years. “Pain medications have been a problem in which that he has been in and out of.”

With Jackson dead, an event-insurance expert anticipated that legal claims would be filed quickly to recoup moneys from the now-canceled tour. “Filing will be made as immediately; there is no doubt about it,” said Jerry Kroll, an attorney who was involved in a canceled-tour battle with Jackson that began in the late 1990s. “People are going to be sitting around saying what do we do now, and then papers will be filed.”

Kroll, who also runs Representyou.com, a search engine for clients looking for lawyers, said fans who bought more than 800,000 tickets for the engagement would soon be looking for reimbusements from Ticketmaster, which brokered sales. These fans should be OK, but others who bought high-priced tickets from brokers might only get the face value of the tickets they are holding.

The entire tour was considered “a risk” by insurers because of Jackson’s past history of not showing up for performances, Kroll told TheWrap. In addition many observers, he said, were worried if Jackson was physically fit enough to perform the concerts, which dwarfed the 21-night engagement by Prince who was in much better shape than Jackson.

Insurance expert Kroll said concert producers AEG Live might have moved forward despite the warning signs because they had insurance and would have been in a position to recover all their expenses if the tour canceled.

And, of course, had it gone off they not only would have made money, but they would have benefited from enormous public good will and bragging rights.

“There is a thrill people get when they do business with an entertainer like Jackson,” said Kroll, who was involved in a $21 million suit against the singer by a German concert promoter. Jackson was a no-show at the events, forcing the successful lawsuit.

Jackson was born in Gary, Indiana, on Aug. 29, 1958, the seventh of nine children. Pushed by his father Joe, he and four of his brothers — Tito, Jermaine, Jackie and Marlon — formed the Jackson 5, frequently performing at a string of black clubs.

After a series of songs recorded for a local label, they were picked up by Barry Gordy’s Motown Records in 1968. Their first four singles ("I Want You Back," "ABC,” "The Love You Save" and "I’ll Be There") all reached number one on the Billboard charts. As a solo artist, Jackson released a series of solo albums, also on Motown. But sales began to flag, and Jackson and his brothers left Motown in 1975, moving to Epic Records under the name the Jacksons.

Three years later, he starred as the Scarecrow in the musical “The Wiz,” with songs arranged by Jones, who Jackson tabbed to produce his next solo record, “Off the Wall,” which garnered critical acclaim and reached number three on the Billboard charts. (See accompanying story, "A Michael Jackson Original-Album Discography.")

That was followed by the landmark “Thriller,” which became the biggest album of all time, spending 37 weeks at number one, selling 109 million copies worldwide and garnering Jackson eight Grammys — the most trophies ever for one person in ay year.

In 1985, Jackson paid $47 million for the publishing rights to the Beatles back catalogue; he sold a share of the rights to Sony for $95 million in 1995.

It was a height he’d never reach again. Sales slowed for albums "Bad" and "Dangerous," and the latter was panned by usually fawning critics. And his behavior became increasingly bizarre. There were reports of him photographing himself with babies in hospital maternity wards in the dead of night, of buying the bones of the Elephant Man and of sleeping in a hyperbaric oxygen chamber.

His constant companion became a chimp named Bubbles. He was photographed carrying actor Emmanuel Lewis around on his shoulder, he had a questionably close relationship with child star Macaulay Culkin and he moved into a ranch he called Neverland near Santa Barbara, where he and an unending stream of young children romped through its lavish amusement park and zoo.

His nose became practically imperceptible, his skin whiter — the result, he insisted, of a skin condition.

He pulled away from his family, and publicly accused his father of physical abuse. Indications were that despite a lavish lifestyle, he was on the brink of bankruptcy.

He began taking heavy doses of medication to deal with the stress when the allegations were first made public, and his health quickly deteriorated. He canceled his Dangerous World Tour and went into drug rehabilitation.

He had been unable to pull it together since, performing in public only rarely, and for short periods. In 2008, he released a 25th anniversary package of "Thriller," which sold over sold over 3 million copies worldwide.

He’d also had trouble keeping control of his Neverland Ranch.

On February 25, 2008, Jackson was told that unless he paid off $24 million by March 19, a public auction would go forward. On March 13, 2008, Jackson’s lawyer, announced that a private agreement had been reached with the private investment group, Fortress Investment, to save Jackson’s ownership.