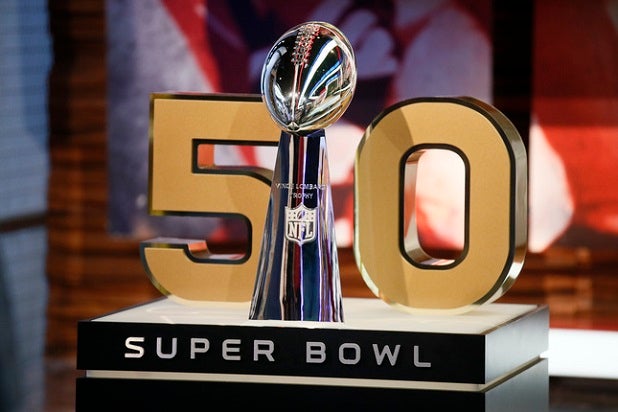 The Vince Lombardi Trophy stands n front of the No. 50, the number of the Super Bowl following the upcoming season, during a media availability at the NFL Network studios, Wednesday, Sept. 9, 2015, in Culver City, Calif. (AP Photo/Danny Moloshok)

Super Bowl 50 will pit something old — the Denver Broncos’ 39-year-old quarterback Peyton Manning — against something new and blue: The Carolina Panthers and their young star Cam Newton.

The Denver Broncos staved off a wild fourth quarter comeback try from the New England Patriots to win the AFC Championship, 20-18 Sunday. Later, the Carolina Panthers blew out the Phoenix Cardinals in the NFC Championship game, 49-15.

The NFL’s showcase will kick off at 6:30 ET on Sunday, Feb. 7, at Levi’s Stadium in Santa Clara, Calif., and will be broadcast by Fox. It’s the second trip to the Super Bowl in three years for Denver, while Carolina hasn’t been to the big game since 2003.

Last year’s game will have a tough act to follow. The New England Patriots’ 28-24 victory over the Seattle Seahawks last year was the most-watched show in U.S. television history, with 114.4 million people tuning in to Fox. Katy Perry’s halftime show was also the most-watched performance ever, averaging 118.5 million viewers.

Beyonce and Bruno Mars will join Coldplay for the halftime show this year. She will presumably join the group for a rendition of its single “Hymn for the Weekend,” which features her vocals.

It’s always interesting to see what movies Hollywood studios roll out on Super Bowl weekend, while at the same time spending millions of dollars on commercials to promote their would-be blockbusters.

This year, Joel and Ethan Colen’s comedy “Hail Ceasar!,” the Nicholas Sparks romance “The Choice” and Burt Steers’ “Pride and Prejudice and Zombies” all open on Friday preceding the big game.