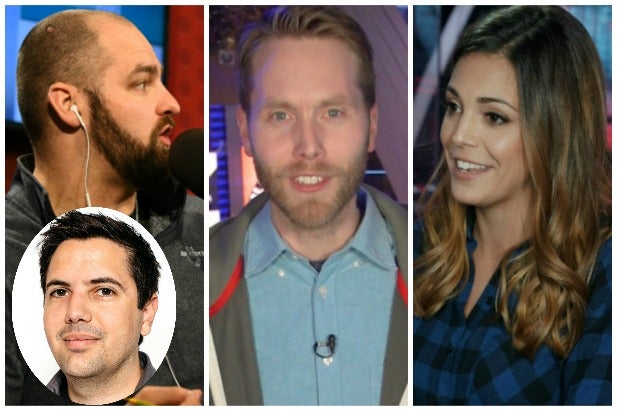 Super Bowl LII is nearly upon us, and with the big game comes over-eating, funny commercials, and, yes, lots and lots of gambling.

While TheWrap does not endorse wagering in states or countries where sports betting is illegal, we decided to have some fun with ESPN personalities Katie Nolan, Mike Golic Jr. and Cy Amundson.

Senior TV reporter and resident football expert Tony Maglio (pictured above on the Golic Jr.-third) got in on the just-for-fun gaming. Below are 15 of Sunday’s funnest available prop bets and everyone’s selections. Odds are courtesy of online sports-betting, casino, poker and horse-racing site Bovada.

1) How long will it take for Pink to sing the U.S. national anthem?
Over 2 Minutes
Under 2 Minutes
*From moment starts singing until the note “Brave” ends for first time.

Katie: Over
Cy: Under
Golic Jr: Over
Tony: Under

2) Who will be shown first on TV during the singing of the national anthem?
Tom Brady
Nick Foles

Katie: Under
Cy: Over
Golic Jr: Over
Tony: Over

4) How many times will Gisele Bündchen be shown on TV during broadcast?
Over 1.5
Under 1.5
*Note: From kickoff until final whistle, halftime does not count.

Katie: Over
Cy: Over
Golic Jr: Over
Tony: Over

5) How many times will the temperature outside the stadium be mentioned during broadcast?
Over 1
Under 1
*Note: From kickoff until final whistle, halftime does not count.

Katie: Over
Cy: Under
Golic Jr: Over
Tony: Over

Also Read: 'This Is Us' Promises to Destroy You With Jack's Death in Post-Super Bowl Episode (Video)

6) How many times will the Rocky statue in Philadelphia be show during broadcast?
Over 1
Under 1
*Note: From kickoff until final whistle, halftime does not count.

Katie: Under
Cy: Under
Golic Jr: Under
Tony: Over

Also Read: N*Sync Reunion at Super Bowl LII? Don't Get Your Hopes Up

7) Will Justin Timberlake be wearing a hat when he begins his halftime show performance?
Yes
No

8) What color will the liquid be that is poured on the game winning coach?
Lime/Green/Yellow
Orange
Red
Clear/Water
Blue
Purple
*Note: Must be clearly shown on TV.

10) Who will the Super Bowl MVP mention first in his speech?
Teammates
God
City
Coach
Owner
Family
Does not mention any of the above

11) Will Tom Brady’s jersey be stolen again?
Yes
No
*Note: Must be reported by ESPN within 48 hours of the end of the Super Bowl.

14) The first turnover of the game will be?
Fumble
Interception
No Turnover in Game

15) What will the total combined points of both teams be?
Over 48.5
Under 48.5
*Final score, not after four quarters in the event of overtime.

Katie: Over
Cy: Over
Golic Jr: Over

There you have it, folks: Place your bets and wish us luck!

Readers can catch Nolan and Amundson hosting “SportsCenter” twice daily on Snapchat. She and Golic Jr. co-host “Double Coverage,” which will start Wednesday at 4 p.m. live on Twitter.