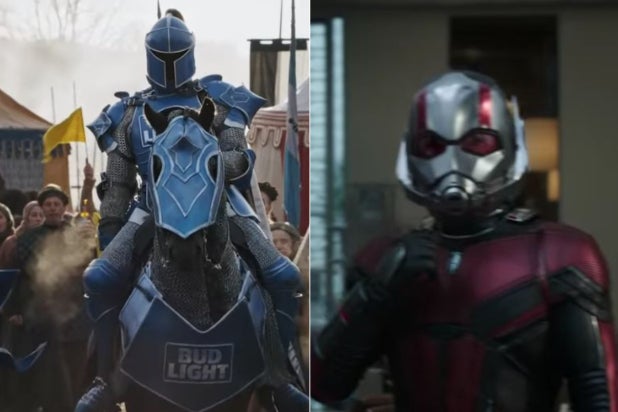 On Sunday, the New England Patriots defeated the Los Angeles Rams 13-3 in an underwhelming Super Bowl to win their sixth championship, which meant that most of the excitement from the game came from the commercials.

The Super Bowl remains the most expensive ad buy on TV, with CBS getting between $5.1 and $5.3 million for 30-seconds of airtime, an individual with knowledge of the negotiations tells TheWrap.

Last year’s game cast ad buyers an average of $5.2 million for 30-seconds of airtime, according to data from ad-tracking firm Kantar Media. Overall, NBC brought in $482 million in ad time for last year’s coverage, which included pre- and post-game shows (for the game itself, NBC generated $408 million).

Below, TheWrap has rounded up every commercial and movie trailer that aired during the Super Bowl:

Well, we didn’t get a trailer for the eighth and final season of HBO’s “Game of Thrones,” so we’ll have to settle for this strange Bud Light-“GoT” mashup that saw The Mountain fight the “Bud Knight.” Sure.

“The Avengers” meets “The Leftovers” in this short trailer that hits heavy on the grief of Earth’s Mightiest Heroes following Thanos’ snap.

It’s been 20 years since Woody and Bo Peep have seen each other, but in the Super Bowl trailer for Pixar’s “Toy Story 4,” we finally see what’s become of the gentle doll.

CBS debuted the first teaser for its upcoming reboot of “The Twilight Zone,” which was disguised as a takeover of CBS’s Super Bowl broadcast.

The Avengers weren’t the only Marvel heroes to get the Super Bowl treatment, as the studio showcased its newest hero.

Lil Jon, Steve Carell and Cardi B starred in Pepsi’s Super Bowl, and they’re all asking the same question.

Those M&Ms can be some pretty unruly car passengers. Just ask Christina Applegate.

Mr. Peanut, Alex Rodriguez and Charlie Sheen: Unfortunately, it’s not a “Three Amigos” reboot, so this will have to do.

Now here’s a mashup we would’ve never expected. Jeff Bridges reprised his “The Big Lebowski” character, The Dude, to share a drink with Sarah Jessica Parker, reprising her own iconic role as Carrie Bradshaw from “Sex and the City.”

Chance the Rapper and The Backstreet Boys teamed up for Doritos’ Super Bowl ad, where Chance remixes a very popular song from the boy band’s catalog.

Michelob ULTRA released out a pair of widely-different Super Bowl ads. One featured a robot and the other Zoe Kravitz in the quietest ad in history. We’re just as confused as you are.

Alexa… are you OK?

Speaking of Alexa… Amazon wants you to know there were some features of that didn’t make the cut, including a dog collar that Harrison Ford found very annoying.

Sarah Michelle Gellar starred in Olay’s first-ever Super Bowl ad that plays on her horror-film chops in “I Know What You Did Last Summer” and “Scream 2.”

In recent years, the Super Bowl has been home to unknown brands looking to get in front of its massive audience. Expensify, a software company that develops an expense management system for personal and business use, has enlisted 2 Chainz and Adam Scott to talk about finance management.

We know next to nothing about WeatherTech — who has become a Super Bowl mainstay in recent years — but it has the dog Scout. And that’s enough for us.

Also Read: How David Oyelowo and Storm Reid Became the Stars of 'Relive' - a Film Originally About White People on an Ohio Farm (Video)

Yup, that is really Andy Warhol.

It’s only fair for the automaker to get an ad during the Super Bowl. After all, its name is on the host stadium. Ludacris and Lassie, among others, guest star in the ad touting the brand’s new A-Class model.

It’s mourning in America, in this creepy trailer for the dystopian drama’s third season.

The toothpaste brand enlisted Luke Wilson for its Super Bowl commercial and it appears that he has some boundary issues.

The Japanese automaker went for the inspirational hook with its Super Bowl ad for the RAV4 hybrid, which stars Antoinette “Toni” Harris, current community college football player who dreams of being the first female to play in the NFL.

The tech company will tell the inspirational story of passionate young gamers rising to the top of their game with a little help from their friends, family and, of course, the Xbox Adaptive Controller.

Also Read: The Most and Least Watched Post-Super Bowl TV Shows: 'Friends,' 'Glee,' 'Blacklist,' 'This Is Us'

The food maker usually has one of the most talked-about ads in every Super Bowl. This year was no different, in what can only be described as The Reverse Dog Show.

The dating-app company made its Super Bowl debut with an ad starring tennis legend Serena Williams. The 30-second spot was part of the company’s “The Ball is In Her Court” campaign.

Febreeze got NFL Hall of Famer Terrell Owens for their ad about party preparations. Well, more accurately, the ad is about the making of the Super Bowl ad. Ad-ception?

The home of Hollywood has a team back in the Super Bowl. On Feb. 3, the Los Angeles Rams will face the New England Patriots in Atlanta for the Big Game: Super Bowl LIII. Stars from film, TV and music will be cheering on the Rams as an LA team returns to the Super Bowl for the first time in 39 years. Some of them have long cheered for the Rams before the team left for St. Louis in 1994, while there are also some that have become passionate fans since the team's return in 2016.

If you're backing the Rams, or cheering against the Patriots, here is a look at some of the Hollywood stars who will be cheering right along with you. No VIP pass required.