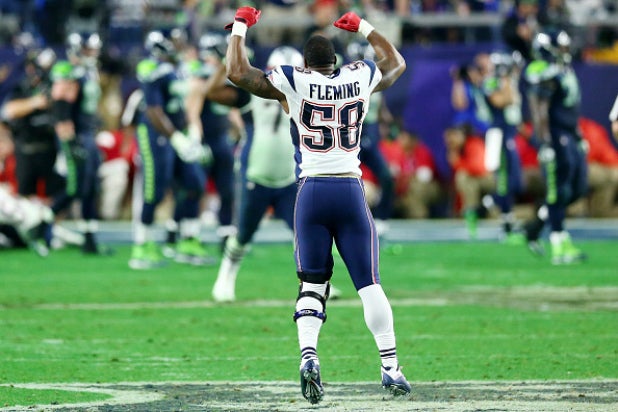 The New England Patriots won a tight Super Bowl XLIX, which aired Sunday evening on NBC. The final score was 28-24, with last year’s defending champion Seattle Seahawks ending up just a bit short — about a yard, to be exact.

was an instant classic, coming down to the wire — good news for NBC Sports, which should expect some gaudy Nielsen numbers tomorrow. It also served as an excellent lead-in for hit drama “The Blacklist,” starring James Spader. Last year, Seattle crushed the Denver Broncos in a snoozer and Fox still hauled in 112.2 million viewers. It is reasonable to assume that the tightness of Sunday’s contest could break that record.

Al Michaels and Cris Collinsworth had the call from Arizona for the broadcast network; Tom Brady was named Most Valuable Player following the final whistle. The Patriots quarterback threw for 328 yards and four touchdowns, tossing two interceptions in the winning effort.

This year’s postseason-concluding matchup was close and intense from start to finish, with a mini-brawl even breaking out just before the final play. Prior to that down, Seattle quarterback Russell Wilson threw an interception on an attempted slant, effectively handing over the game. Had his pass been completed to the intended team, the Seahawks would have likely taken a 31-28 lead with very little time left in the season’s final game.

That last-gasp Seattle drive had some magic going for it before the turnover, as an incredible falling, juggling catch was made by wide receiver Jermaine Kearse down the right sideline. The team looked destined to close it out and earn a second ring in a row, but the pickoff by New England’s Malcolm Butler turned the momentum on a dime, redirecting the Vince Lombardi Trophy back to the AFC.

The season-clinching interception was Wilson’s lone pick of the night. He had two TDs on 247 yards passing, otherwise playing pretty well after a noticeably slow start.