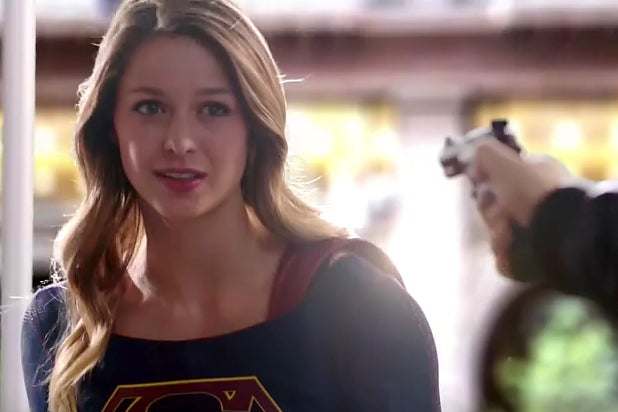 Monday’s episode of “Supergirl” is titled “Human for a Day,” and after the events of the last episode, it’s not hard to guess why.

Melissa Benoist‘s Kryptonian superhero will indeed spend an hour without her powers, after last week’s big battle with the Red Tornado (Iddo Goldberg) left her depleted of solar radiation – that from which she derives her superpowers.

This mythology is straight out of comic book lore, though recent comic book lore. DC Comics Chief Creative Officer Geoff Johns, also an executive producer on “Supergirl,” created it in Issue 39 of his recent “Superman” run.

“I was such a fan of that comic and that run and talked to Geoff and asked if we could do something with that and he said absolutely,” EP Andrew Kreisberg told reporters during a recent visit to the set.

“We’re all set up in a certain way where [Kara’s] in a place where she’s struggling with her role and am I doing this well and what should I be doing? And then it gets taken away from her. We also just love the idea of – like [‘Arrow’s] Oliver and like [‘The Flash’s’] Barry — Kara’s a hero whether she has her powers or not.”

Benoist agreed with the sentiment.

“Well, obviously it’s kind of a frustrating feeling,” the actress said of her character losing her superhuman abilities. “What I think the whole point of the episode is you don’t need powers to be a hero. What is in Kara’s heart is what makes her a hero. So how does she deal with tragedy in the city, how does she save people without being able to fly and have super strength and be made of steel? How does she handle that?”

While Kara’s down for the count, she’s not out of the superhero game, and a scene from the trailer for the episode suggests she’ll find other ways to save the day. And it’s something cribbed directly from her more famous cousin.

“There’s a great moment in the [Johns and Romita] comic where Superman confronts a guy with a gun, and basically talks him out of it, even though he knows if the guy pulls the trigger he’ll get killed,” Kreisberg said. “That sort of became the centerpiece of the episode. She needs a couple of days and unfortunately it’s the day of the giant earthquake.”