Contrary to widespread reports bemoaning this year’s summer box office slump, North American ticket sales are actually up 2.84 percent over last year’s at this time — 108 days after the first Friday in May — to a whopping $4.14 billion.

According to comScore, this year’s movies are pacing ahead of 2015 hits like “Jurassic World” and “Inside Out,” which racked up $4.02 billion in the 108 days after the first Friday in May.

Sixteen weeks have already passed as summer 2016 begins to wrap up, and 11 of those outperformed comparable weeks in 2015, according to both comScore and the National Association of Theatre Owners.

All of it sets up this summer, with blockbusters like Disney’s “Finding Dory” and “Captain America: Civil War,” poised to end as either the second or third biggest on record, depending on how this next week plays out. (2013 holds the all-time record, with $4.37 billion in overall domestic grosses.)

The record-breaking pace comes despite a quirk in the calendar that gives this year’s May-to-Labor Day frame one less weekend that last year’s.

“In reality, summer 2016 is on par with 2015, despite being a week shorter,” said Patrick Corcoran, vice president of communications at NATO. 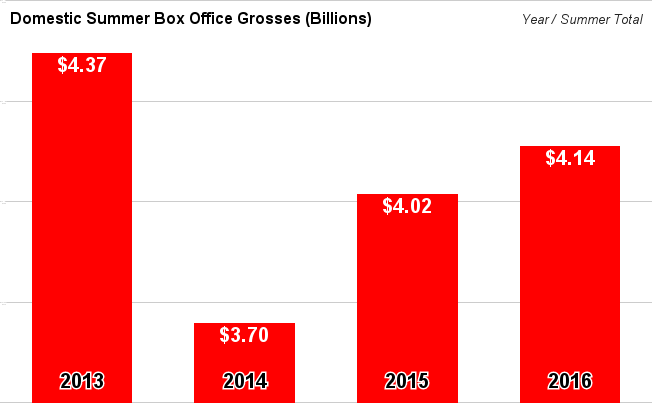 In addition, estimated attendance is up slightly from last year, according to the National Association of Theatre Owners.

So why did a lot of people think the summer was on a downturn? Blame it on the lackluster performances of some high-profile titles, Corcoran said. “The press likes to declare winners and losers, but the health of the industry is not dependent on a few titles,” he told TheWrap.

There were a few complete bombs, including this past weekend’s pricey Paramount-MGM reboot “Ben-Hur,” Legendary’s “Warcraft” (which more than recouped its losses abroad) and also Disney’s “Alice Through the Looking Glass.”

There were also big-name titles, like Fox’s “X-Men: Apocalypse,” which made a lot of money ($155.4 million domestically) but also came with a hefty price tag ($178 million in production costs, and that’s not counting the presumed tens of millions the studio spent on marketing).

Sony’s “Ghostbusters” and Paramount’s “Star Trek Beyond” are two more big-budgeted movies that may or may not eke out a profit but nonetheless contributed significantly to the overall box office tally.

The result has been a kind of lifting of all boats: This summer has seen 13 movies surpass $100 million in domestic grosses, one more than last summer.

Still, there is no denying the glut of sequels (14 this summer, four more than in 2015) has worn on some audiences’ nerves. And that list doesn’t even count reboots like “Ghostbusters.”

“This bottom line is good for the industry,” Dergarabedian said, noting that even underperforming sequels still managed to lure ticket buyers. “But budget losses aren’t good for the studios.”

One other bright spot this year: “Suicide Squad,” which has made $262.4 million in North America so far and is now the No. 4 movie of the summer, defied the odds by opening in August — traditionally considered a dead zone for studio releases.