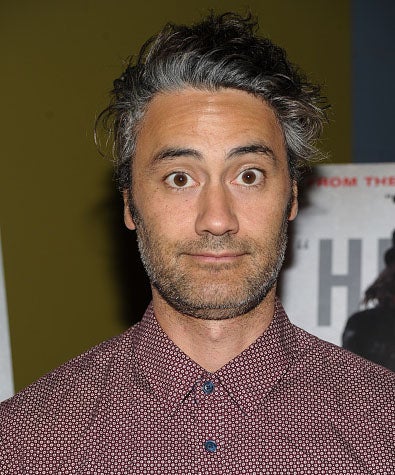 NEW YORK, NY - FEBRUARY 12: Filmmaker/Actor Taika Waititi attends the New York special screening of "What We Do In The Shadows" at Landmark Sunshine Theater on February 12, 2015 in New York City. (Photo by Rommel Demano/Getty Images)

(Spoiler alert: Please do not read on if haven’t seen Marvel’s “Doctor Strange”)

The mid-credit scene in the “Doctor Strange” was actually directed by the filmmaker from another Marvel movie — “Thor: Ragnarok’s” Taika Waititi.

In an interview with Den of Geek, “Doctor Strange” director Scott Derrickson was asked how the mid-credit scene came about, and he confirmed that it was Waititi who directed it.

“Taika [Waititi] shot that – I can’t say if it’s from ‘Thor 3’ or not, but we had our set up and were going to strike it after I finished shooting and it’s a very expensive set with the chamber of relics and the window and everything,” Derrickson said.

“I don’t know where they were on the script process, but it was before they were in production. Taika wrote that scene and came in and shot it. We had no specific intention at that point to use it as the tag, but after we finished our movie we felt that it was kind of perfect.”

The scene is also important as it introduces Benedict Cumberbatch’s character to the wider MCU.

“Until then he’s not really a part of it, he’s just a story happening on his own – but after that tag, it’s all changed,” Derrickson said.

In the first bonus scene, which runs mid-credits, Stephen Strange (Cumberbatch) and Thor (Chris Hemsworth) are having a drink, which should make any beer enthusiast’s mouth water: Thor is chugging a stein of beer that magically keeps refilling.

Strange tells Thor he keeps a “watch list” of individuals and beings from other realms who “may be a threat to this world.” He then asks why Loki is in New York, to which Thor responds that both brothers are trying to find their father, Odin, and bring him back to Asgard. (At the end of “Thor: The Dark World,” Odin’s whereabouts are unknown.)

Strange asks Thor something along the lines of, “So if you found Odin, you’d all adjourn to Asgard, promptly?” Thor agrees: “Promptly.”

Obviously, this seems to be a huge hint about the plot of “Thor: Ragnarok,” which is due in theaters Nov. 3, 2017. It has been revealed that Doctor Strange will appear in May 2018’s “Avengers: Infinity War.” Does this mean he will make a cameo in the third “Thor” installment as well?
“Doctor Strange” is set for release on Nov. 4, 2016.