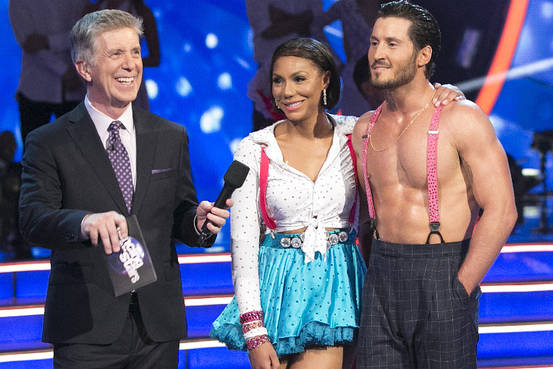 Tamar Braxton is officially bowing out of this season of ABC’s “Dancing with the Stars.”

“With a Heavy heart I regret to inform you that my season of #dwts has to come to an end along with the rest of my tour dates with @musicbykem,” Braxton wrote on her official Instagram account.

“After yesterday’s final #dwts performance I went back to the hospital (after the doctors didn’t want me to leave in the first place) only to find out that I don’t have pneumonia but something way more serious and that is having several P.E.’s (blood clots in both sides of my lungs),” she continued.

Braxton went on to thank her fans for their love and support. She also thanked her dance partner, Val Chmerkovskiy, for being “beyond a friend, brother and the BEST partner EVER.”

At the opening Monday’s episode, host Tom Bergeron told viewers: “Tamar is not here, she was taken to the hospital today midway through dress rehearsal. This is very much a live show, we don’t have all the information at this time. She might return to dance live here, we will keep you posted as we find out.”

Also Read: Ailing Tamar Braxton Returns to 'Dancing With the Stars' as Another Contestant Gets the Boot

Surprisingly, Braxton did make it back later in the night to take part in the team challenge where the contestants had to perform to show-stopping routines from Broadway, Vegas and touring shows.

With a Heavy heart I regret to inform you that my season of #dwts has to come to an end along with… https://t.co/XjsfDYNH1p