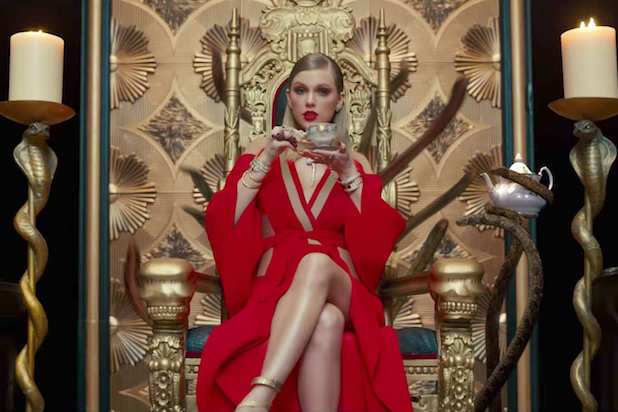 Taylor Swift dethroned Luis Fonsi and Daddy Yankee’s “Despacito” on the No. 1 spot of the Billboard Hot 100 with her song, “Look What You Made Me Do,” and fans rushed to social media to thank the singer for stopping the “Despacito” takeover.

“We knew the only person who could stop the evil that is Despacito was Taylor Swift. We knew and we were right,” one user tweeted.

“Thank you @taylorswift13 for stopping that crap of a song called “Despacito” from breaking @MariahCarey‘s legendary @billboard record,” tweeted another.

Also Read: Taylor Swift Dethrones Her Own Single on iTunes Charts With 'Ready For It?'

“Look What You Made Me Do” also launched with the top weekly download sales this year: 353,000 in the week ending Aug. 31. Swift is the 13th woman with at least five Hot 100 No. 1 singles. Carey leads the pack with 18 No. 1 songs. Swift has also now topped the Hot 100 with the first single from each of her last three albums: “Look What You Made Me do,” “Shake It Off” and “Never.”

See Video: Taylor Swift Drops 'Look What You Made Me Do' Video, and Fans Are 'Confused'

Swift is also the first woman to top the Hot 100 this year. “Look What You Made Me Do” is the first song by a woman unaccompanied by a male artist to rule the Hot 100 since Adele’s “Hello.”

See reactions to Swift’s ascension to the throne below.

we knew the only person who could stop the evil that is Despacito was Taylor Swift. we knew and we were right pic.twitter.com/W2g5RNI9V3

U can hate @taylorswift13 all u want, but she came and dethroned despacito from taking mariahs record soooo pic.twitter.com/ZH92UCSGMQ

Taylor, you are my friend. (She stopped Despacito from passing Mariah's record) https://t.co/cHoJoe8VlG

can we all thank taylor swift for knocking despacito off of no.1

Now that Taylor Swift dethroned Despacito, let's have her help us dethrone Trump.

I was fed up of Despacito . Thank God Taylor is there !

Thank you @taylorswift13 for stopping that crap of a song called "Despacito" from breaking @MariahCarey's legendary @billboard record.

Thank you, @taylorswift13 for ending [that mediocre] "Despacito"'s reign from #1 and stop it from surpassing @MariahCarey's records.

You're entitled to your own opinion about Taylor Swift, but we all have her to thank for pushing Despacito down the iTunes chart pic.twitter.com/2dS2aIej4C

I would like to thank Taylor Swift for essentially killing Despacito and blocking Justin "I Don't Know Spanish" Beiber from making history. pic.twitter.com/pXTeu0752Z

Finally the worst song of the year, Despacito, has been dethroned. Thank you @taylorswift13!!!!