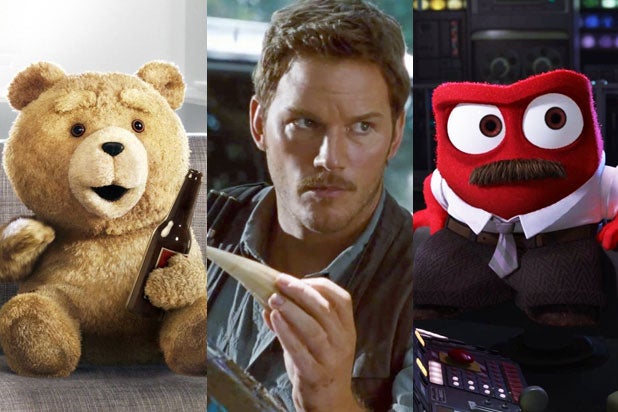 With the R-rated “Ted 2” opening nationwide Friday, funny man Seth MacFarlane gets back in his directorial comfort zone, joining Mark Wahlberg and his potty-mouthed stuffed bear back on the couch.

Pixar’s family hit “Inside Out” and billion-dollar blockbuster “Jurassic World” will be waiting, and will be very tough competition. But MacFarlane will be glad to put his last outing, the disappointing comedy “A Million Ways to Die in the West,” behind him and focus on the follow-up to “Ted” from Universal and Media Rights Capitol.

Tracking has the CGI/live-action hybrid “Ted 2” opening between $50 million and $55 million. That’s right around where “Jurassic World” and “Inside Out” could land, if the dinosaurs drop about 50 percent from last weekend’s record-breaking $106 million second week, and Riley and her emotions drop around 45 percent from their record $91 million second-place debut.

That all adds up to a very tight race on the final weekend of what could be the biggest month ever at the box office. June is at nearly $920 million so far, according to Rentrak, and has six days to catch the $1.3 billion July of 2011, which was driven by “Transformers 3” and “Harry Potter and the Deathly Hallows.” It’s already the busiest month ever for online ticket broker Fandango.

The bet here is that “Ted 2” wins Friday, and that while “Jurassic World” and the teddy bear fight it out for the young male crowd, “Inside Out” sneaks in to win the weekend.

“I think whoever gets to $55 million will take it,” said Exhibitor Relations senior analyst Jeff Bock, “but we might not know until Monday.”

Universal and Pixar parent Disney won’t be too concerned with who winds up No. 1 if all three films do well, especially if they can all exceed $50 million, which would be the first time that’s happened, according to Rentrak.

“Ted 2” is pacing ahead of the 2012 original on social media and advance ticket sales, and will get a boost from the millions of fans who made “Ted” the top-selling DVD/Blu-ray comedy title of the year. The only soft spot might be its reviews, currently at 50 percent on Rotten Tomatoes. They aren’t as good as the first film’s, and word of mouth will matter in a close race, so watch for the CinemaScore on “Ted 2.”

Wahlberg is back as the star, joined this time by new cast members Amanda Seyfried, John Slattery and Morgan Freeman. MacFarlane, in addition to directing and voicing the bear, wrote the script with Alec Sulkin and Wellesley Wild from the first film. He’s also part of the producing team from the original, along with Bluegrass Films’ Scott Stuber, Jason Clark and John Jacobs.

The production budget was $85 million and it will screen in 3,441 theaters.

The PG-rated family film “Max” tells the tale of a military dog who returns from service in Afghanistan traumatized by his handler’s death and is adopted by the fallen Marine’s family.

The reviews are pretty good (69 percent on Rotten Tomatoes), but “Inside Out” will be tough competition. It will screen in around 2,850 theaters for MGM and Warner Bros.