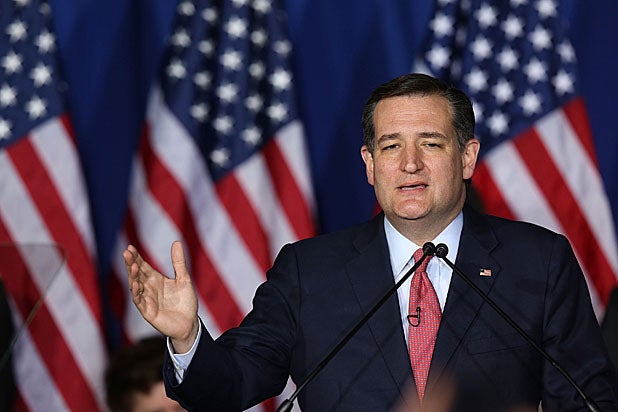 Sen. Ted Cruz fired back at Kevin Bacon and other “Hollywood liberals” after they supported his competitor, Rep. Beto O’Rourke, in the ongoing debate over NFL players’ kneeling during the national anthem.

Media company NowThis posted a video of the speech to Twitter on Tuesday, which quickly went viral and caught the attention of “Footloose” star Bacon, who retweeted it with the caption, “Thanks For sharing this!”

Cruz then retweeted Bacon on Thursday morning with his opinion on the matter. “Most Texans stand for the flag, but Hollywood liberals are so excited that Beto is siding with NFL players protesting the national anthem that Kevin Bacon just retweeted it,” Cruz wrote.

Most Texans stand for the flag, but Hollywood liberals are so excited that Beto is siding with NFL players protesting the national anthem that Kevin Bacon just retweeted it. That means all of us us can now win Six Degrees of Kevin Bacon! https://t.co/8oWpL1AuyF

ok… you win Six Degrees of Kevin Bacon while Beto wins the election.

I would be good w/ that.

That’s not how six degrees of Kevin Bacon works

Cruz and O’Rourke are in a tight battle ahead of November’s election for the former’s U.S. Senate seat.

Bacon isn’t the only Hollywood star who has voiced their support for O’Rourke. “Veep” star Julia Louis-Dreyfus said she would “vote for [O’Rourke]” if she could and Ellen DeGeneres said that she wanted to meet the Democratic candidate. Los Angeles Lakers star LeBron James called the video “A must watch!!!”

In the video that has been viewed more than 13 million times, O’Rourke says, “Peaceful, nonviolent protest including taking a knee at a football game to point out that black men, unarmed, black teenagers, unarmed, and black children, unarmed, are being killed at a frightening level right now.”

Thanks For sharing this! https://t.co/Rjf56Z7fI6

So perfectly articulated. I would vote for @BetoORourke if I could. https://t.co/fUgB5RaAkL

If you read this tweet and thought “Ugh Ted Cruz is the worst” then please donate $1 (or more) to @BetoORourke right here: https://t.co/KpEcjNS9C7 https://t.co/2p9aVibkoC

Solid way to start your morning if you believe in justice and dignity for all. I’m keeping an eye on this guy. https://t.co/OpiHHaYWZs