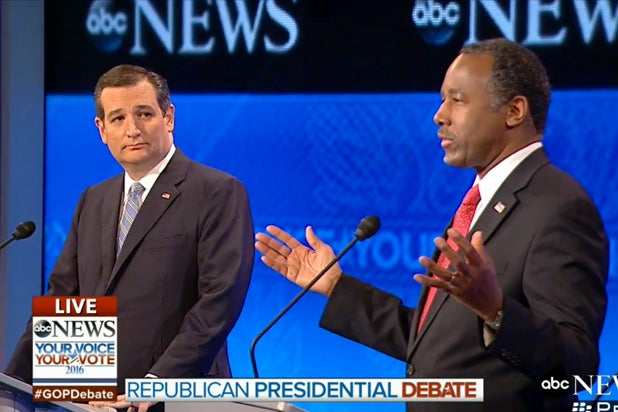 Ted Cruz had a rough night in the New York primary on Tuesday as Republican voters decided he’s their last choice among the three remaining GOP candidates. And in one district, Cruz didn’t even place that high.

Despite the withdrawal of the retired neurosurgeon from the race back in early March, residents of Westchester prefer Ben Carson to the Texas Senator regardless of who is technically running.

As Daily Beast reporter Gideon Resnick asked on Twitter, “Who are these people voting for Ben Carson?!?”

Donald Trump, a New York native, clinched a decisive victory with networks projecting his win within seconds of polls closing. As soon as Trump was declared the winner, the city’s iconic Empire State building turned red in his honor. (The landmark lit up in dark blue when Clinton was declared the winner on the Democratic side.)

As Frank Sinatra’s “New York, New York” played in the background, Trump took to the stage at his Trump Tower in Manhattan, telling supporters, “We don’t have much of a race anymore, based on what I’m seeing on television. Senator Cruz is just about mathematically eliminated.”

Also Read: Ben Carson Admits He 'Would Have Preferred' Not to Endorse Donald Trump

The Manhattan real estate developer  — who’s been struggling to reshape his staff amid recent delegate losses in Wyoming, Colorado, Georgia, Virginia and South Carolina — could claim a majority of the 95 delegates if he captures more than 50 percent of the vote in each of the state’s 27 congressional districts.

The win gave Trump a much-needed boost as he heads into Pennsylvania and Indiana, which have emerged — along with California — as must-wins in the GOP contest.

Since dropping out, Carson has endorsed Trump and publicly defended him on multiple occasions.