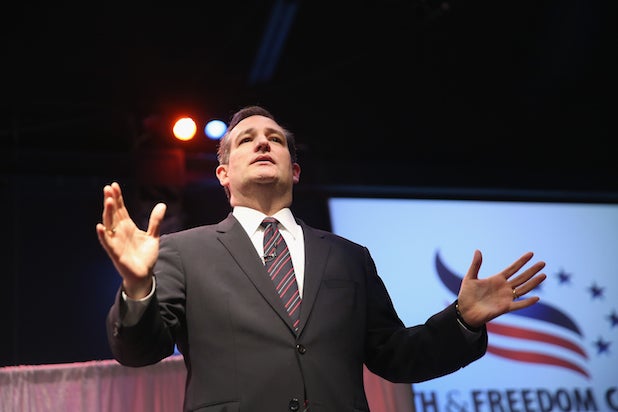 Sen. Ted Cruz followed his performance at Tuesday’s GOP presidential debate with a fundraising trip to Los Angeles on Wednesday.

The first-term senator from Texas was greeted by former Los Angeles mayor Richard Riordan at a private air terminal on West Imperial Highway.

Riordan then rode with him to a Cruz fundraiser in Beverly Hills. Among those attending were “Ray Donovan” star Steven Bauer and playwright David Mamet.

Cruz, who has been surging in the national polls and leads rival Donald Trump in some Iowa surveys, has become one of the most talked-about candidates among the influential bloc of Hollywood conservatives.

“When you listen to Cruz he is incredibly persuasive,” Lionel Chetwynd, Oscar-nominated screenwriter and member of the Hollywood conservatives group Friends of Abe, told TheWrap. “He’s articulate and smart. You walk away thinking, ‘He could really do it.'”

Still, L.A.-area Republicans have not yet coalesced around any one candidate — unlike area Democrats, who have mostly rallied around their party’s frontrunner, Hillary Clinton.

In addition to Cruz, the most talked-about Republican contenders in L.A. include Florida Sen. Marco Rubio and, to a lesser extent, Ben Carson and Jeb Bush.

“I’m still looking at all of the candidates,” Michael Ramirez, a two-time Pulitzer Prize-winning political cartoonist, told TheWrap. “I like Rubio and Cruz.”