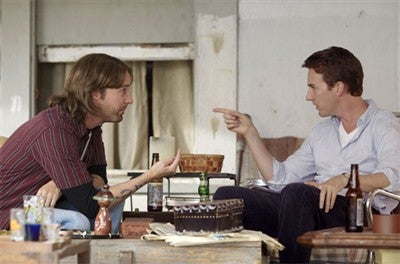 (Update 4/2/10 10 a.m. PST: Indiewire’s Anne Thompson reports that Telepathic Studios will distribute "Leaves of Grass." David Dinerstein will serve as the public face of the film’s distribution in lieu of Telepathic’s anonymous backer. The film will be released at some point this summer. A press release is expected to be issued shortly. Stay tuned.)

"Leaves of Grass," which was supposed to be released this Friday by First Look Pictures, has been acquired by a new distributor who has pushed the release to summer, TheWrap has confirmed.

Tim Blake Nelson’s "Leaves of Grass" is a crime comedy that stars Edward Norton in dual roles as a mild-mannered Ivy League professor — and his twin brother who grows pot in Oklahoma.

Norton addressed the move on his Twitter feed (@EdwardNorton): "Update on LoG: very good news, the film has been picked up by a new company and will be given a much wider summer release. Details to come but we’re all really happy because now it will likely get to many more cities than just NY and Dallas. This happened very much due to great audience response and reviews and press out of SxSW. So huge thanks to everybody in Austin."