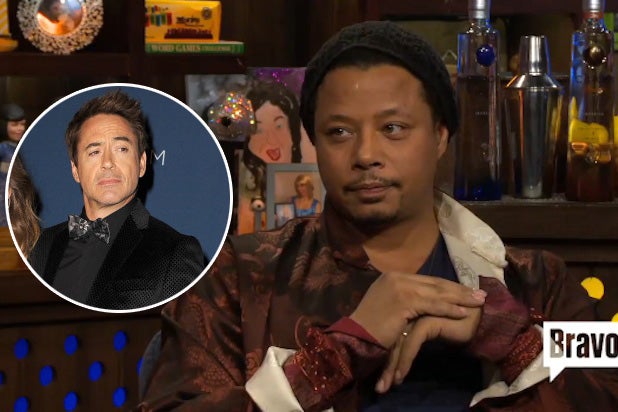 Terrence Howard revealed the behind-the-scenes drama that left him out of the “Iron Man” sequels on Thursday’s ” Watch What Happens Live.” And, he is bitter.

According to the actor, he was double-crossed by franchise star, Robert Downey Jr. or as he referred to him, “the person that I helped become Iron Man.”

“It turns out that the person I helped to become Iron Man, when it was time to re-up for the second one, took the money that was supposed to go to me and pushed me out,” Howard told Bravo’s Andy Cohen.

Howard played the role of James “Rhodey” Roades on the 2008 film, the army Colonel and high-trained agent who was working for the government and possesses his own iron suit from Tony Stark (Downey), called “War Machine.”

“The Best Man Holiday” star told Cohen that reports that he wanted the same money as Downey were false. Instead, he said the producers tried to offer him less money than they had previously agreed to for the sequel because they believed the movie would be successful with or without him.

That became true. The role was then recast with “House of Lies” actor Don Cheadle and the franchise has made close to $2 billion.

Nevertheless, Howard reached out. “I called my friend that I helped get the first job and he didn’t call me back for three months,” he said.