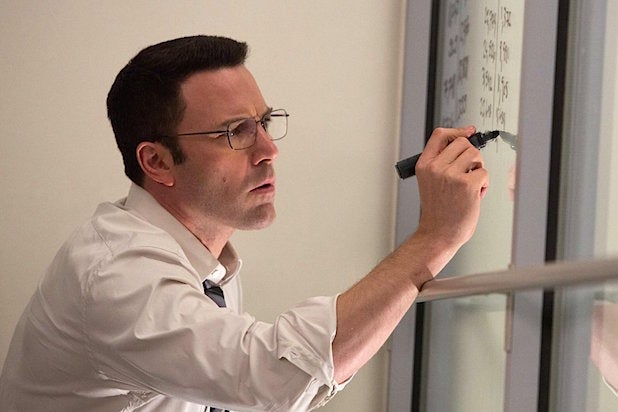 Warner Bros. crime drama “The Accountant,” starring Ben Affleck as a math mastermind, made an estimated $24.7 million to win the weekend as it opened in theaters.

Playing in 3,332 locations, its first weekend grosses are quite good, seeing as it was produced for little more than $40 million (not counting marketing costs). The film also came in higher than studio estimates set earlier last week at approximately $17 million.

“The Accountant” has an A CinemaScore from those surveyed on opening night, although critics gave it a much lower 52 percent on Rotten Tomatoes.

Also Read: Does Ben Affleck's 'The Accountant' Add Up With Real Accountants?

Also opening this weekend is the followup to Kevin Hart‘s enormously popular standup concert movie “Let Me Explain,” which debuted to $10 million in 2013.

Universal’s “Kevin Hart: What Now?” squeaked by the same studio’s holdover, “The Girl on the Train,” for the No. 2 spot, raking in an estimated $12 million during its three-day debut and opening to higher grosses than its predecessor. (The Emily Blunt thriller was neck and neck with “What Now?,” coming in at No. 3 by just less than $10,000, according to current estimates.)

The comedy show film’s production budget was under $10 million (not counting marketing costs), making its profitability prospects quite bright as it has played in 2,567 theaters this weekend.

“Kevin Hart: What Now?” has an A- CinemaScore and solid 77 percent on Rotten Tomatoes.

Sci-fi adventure from Dolphin Films, “Max Steel,” is being distributed by Open Road in 2,034 locations. The film, directed by Stewart Hendler, stars Ben Winchell as teenager Max McGrath, who morphs with alien companion Steel to become a turbo-charged superhero.

It didn’t come close to cracking the top five, opening to grosses estimated at roughly $2 million.

The young adult-geared movie has a B CinemaScore and the lowest possible Rotten Tomatoes score of zero percent among only eight critics whose reviews were tallied on the review aggregation site.

Rounding out the top five were Fox’s “Miss Peregrine’s Home for Peculiar Children” in fourth place, earning $8.9 million in its third week; and Lionsgate’s “Deepwater Horizon,” grossing $6.4 million for the fifth spot, also in its third week in theaters.

“The Accountant” also stars Anna Kendrick and J.K. Simmons and revolves around a numbers guy who becomes embroiled in a dangerous plot after taking on a new client who the Treasury Department is tracking. The R-rated drama was directed by Gavin O’Connor (“Warrior,” “Jane Got a Gun”) and also features performances by Jon Bernthal, Daeg Faerch, Jeffrey Tambor and John Lithgow.

“What Now?” shows Kevin Hart as he performs for 50,000 fans in his hometown of Philadelphia for a record-setting, sold-out final performance of the biggest comedy tour in history. Halle Berry and Hart’s longtime friend Don Cheadle also make appearances.

With “What Now?” coming in higher than “Let Me Explain,” the film is poised to enter the top three highest-grossing stand-up comedy movies of all time. It might even have an easy time making the No. 2 spot, ahead of 2000’s “The Original Kings of Comedy,” which grossed $38.2 million. But it will likely have a hard time beating the No. 1 movie in the category — 1987’s “Eddie Murphy Raw,” which earned a total of $50.5 million.

“What Now?” is the latest in a spate of collaborations between Universal and Hart just this year alone, coming after “Ride Along 2,” “Central Intelligence” and “The Secret Life of Pets.”